Modoc County is a county located in the far northeast corner of the U.S. state of California. As of the 2010 census, the population was 9,686. making it the third-least populous county in California. The county seat and only incorporated city is Alturas. Previous county seats include Lake City and Centerville; the latter is now a ghost town. The county borders Nevada and Oregon.

The county's official slogans include "The last best place" and "Where the West still lives".

Prior to the arrival of Europeans in the region, varying cultures of Native Americans inhabited the county for thousands of years. At the time of European encounter, the Modoc people lived in what is now northern California, near Lost River and Tule Lake. The county was named after them. The Achumawi (or Pit River Indians, for which the Pit River is named), and the Paiute also lived in the area. To the north were the Klamath in present-day Oregon.

The first European explorers to visit Modoc County were the American John C. Frémont and his traveling party (including Kit Carson) in 1846, who had departed from Sutter's Fort near the confluence of the American and Sacramento Rivers. (This is where the city of Sacramento lies today.)

The northern boundary of California, and eventually Modoc County, had been established as the 42nd parallel since the time of Mexican possession. In the absence of a reliable survey of the 120th meridian, the eastern boundary of northern California was a subject of contention before Modoc County formed. The Territory of Utah requested jurisdiction to the summit of the Sierra Nevada. At the time, the Warner Mountains were believed to be a part of the Sierra Nevada, so this would have included Surprise Valley, but California denied the request.

In 1856, the residents of Honey Lake Valley reckoned the 120th meridian to be west of their valley, placing them in Utah territory, and attempted to secede and form a territory they called Nataqua. Nataqua would have included Modoc County. In 1858, the Territory of Nevada, with its capital now in Carson City, successfully seceded from Utah, and assumed jurisdiction to the summit of the Sierra Nevada until the 120th meridian was surveyed in 1863.

After Nevada was granted statehood in 1864, the region of current Modoc County was placed within jurisdiction of Shasta County, California, and Siskiyou County was, in turn, generated from Shasta County in 1852.

Increasing traffic on the emigrant trail, unprovoked militia raids on innocent Modoc, and a cycle of retaliatory raids increased a cycle of violence between settlers and the tribes in the area. In 1864, the Klamath, Modoc and Yahooskin band of the Shoshone signed a treaty ceding lands in both Oregon and California, and the tribes were colocated on the Klamath Reservation. Harassed by the Klamath, traditional competitors, a band of Modoc led by Captain Jack returned to California and the Tule Lake area.

The Modoc War (or Lava Beds War) of 1872-73 brought nationwide attention to the Modoc during the protracted battles. From strong defensive positions in the lava tubes, 52 Modoc warriors held off hundreds of US Army forces, who called in artillery to help. Peace talks in 1873 stalled when the Modoc wanted their own reservation in California. Warriors urged killing the peace commissioners, thinking that the Americans would then leave, and Captain Jack and others shot and killed General Edward Canby and Rev. Eleazer Thomas, and wounded others. More Army troops were called in to lay siege to Captain Jack's Stronghold. Dissension arose, and some Modoc surrendered. Finally most were captured, and those responsible for the assassinations were tried and executed. More than 150 Modoc were transported to Indian Territory as prisoners of war. The area has since been designated the Lava Beds National Monument.

Settlement of the county began in earnest in the 1870s, with the timber, gold, agriculture, and railroad industries bringing most of the settlers into the area. The county was a crossroads for the Lassen Applegate Trail, which brought settlers north from Nevada to the Oregon Trail and south to trails leading into California's central valley. Early settlers included the Dorris, Belli, Essex, Scherer, Trumbo, Flournoy, Polander, Rice and Campbell families.

Modoc County was formed when Governor Newton Booth signed an Act of the California Legislature on February 17, 1874 after residents of the Surprise Valley region lobbied for the creation of a new county from eastern Siskiyou County land. The county residents considered naming the newly formed county after General Edward Canby, who had been killed the year before at peace talks in an ambush by Modoc. The idea of naming the county "Summit" was also considered, but the populace eventually settled on "Modoc"; the war was over and 153 of Captain Jack's band had been transported to Indian Territory as prisoners.

The Dorris Bridge post office opened in 1871, was renamed Dorrisville in 1874; due to its central location, Dorrisville became the county seat when Modoc County formed that year, although both Adin and Cedarville were larger towns. In 1876, it was renamed Alturas, which means "The Heights" in Spanish. The census of 1880 showed a population of 148. Settlement continued over the next two decades, until the city was officially incorporated on September 16, 1901; the county's only incorporated city. 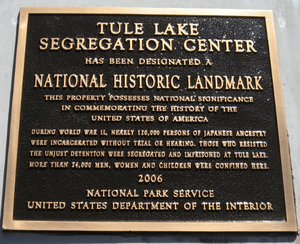 During World War II, the US government developed several thousand acres just south of Newell as a Japanese American internment camp, responding to fears and prejudice by Californians. Tule Lake War Relocation Center was the site of temporary exile for thousands of Japanese-American citizens, who lost most of their businesses and properties where they had formerly lived in coastal areas. A historical marker marks the site along State Route 139 in Newell.

Tule Lake was the largest of the "segregation camps." On November 8, 2005 Senator Dianne Feinstein called for the camp to be designated a National Historic Landmark. In December 2008 it was designated by President George W. Bush as one of nine sites—the only one in the contiguous 48 states—to be part of the new World War II Valor in the Pacific National Monument.

There are 2.25 persons per square mile, making this one of the most sparsely populated counties in California. It is also (almost) the only rectangular county in California, there is a slight deviation around the Tule Lake National Wildlife Refuge. 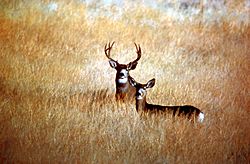 The northern half of the county is the Modoc Plateau, a 1-mile (1.6 km) high expanse of lava flows, cinder cones, juniper flats, pine forests, and seasonal lakes, plus the alkaline Goose Lake. Nearly 1 million acres (4,000 km²) of the Modoc National Forest lie on the plateau between the Medicine Lake Highlands in the west and the Warner Mountains in the east. The plateau supports large herds of mule deer (Odocoileus hemionus), Rocky Mountain Elk (Cervus canadensis), and pronghorn (Antilocapra americana). There are also several herds of wild horses on the plateau. The Clear Lake National Wildlife Refuge and Long Bell State Game Refuge are located on the plateau as well. The Lost River watershed, which later drains into the Klamath River basin, drains the north part of the plateau, while southern watersheds either collect in basin reservoirs or flow into the large Big Sage Reservoir, which sits in the center of the county, which later flows into the Pit River.

Below the rim of the Plateau is Big Valley in the extreme southwest corner of the county, and the large Warm Springs Valley that forms the bottom of the Pit River watershed that runs through the county. The north fork and south fork of the Pit River come together just south of Alturas. The River collects hundreds of other small creeks as it flows south towards Lake Shasta, where it joins the Sacramento River and drains into the San Francisco Bay.

The eastern edge of the county is dominated by the Warner Mountains. The Pit River originates in this mountain range. Hundreds of alpine lakes dot the range, all of which are fed by snow-melt and natural springs. East of the Warner Range is Surprise Valley and the western edge of the Great Basin.

Hot Springs and lava caves are common to Modoc County. There are some geothermal energy resources available in the county, though their viability is highly variable.

A great diversity of plants are found in Modoc County, since this is situated within the biodiverse California Floristic Province. Numerous native trees are found in the county including Garry Oak and Washoe Pine trees. Jeffrey Pine and Ponderosa Pine are also found in large numbers.

The largest ethnicity/ancestry groups in Modoc county include: 15% English, 14% Irish and 13% German of whom 90.4% spoke English and 8.8% Spanish as their first language.

There were 3,784 households out of which 29.1% had children under the age of 18 living with them, 54.6% were married couples living together, 8.8% had a female householder with no husband present, and 32.6% were non-families. 28.1% of all households were made up of individuals and 12.7% had someone living alone who was 65 years of age or older. The average household size was 2.39 and the average family size was 2.91.

Modoc County has the lowest median household income of any county in California.

In 2005, the median home price reached $100,000 for the first time ever, over a 40% increase since 2000. Much of this can be traced to an influx of residents from other parts of the state, who find the housing bargains attractive. Some of these are retirees who have sold their houses for large profits in other parts of the state, using the proceeds to live on, while others are people who are able to telecommute. This sudden rise in housing prices become unaffordable for locals, who find themselves unable to purchase homes given their limited incomes.

Additionally, the eastern Modoc County communities of Eagleville, Cedarville, Lake City, and Fort Bidwell are connected via Surprise Valley Road, which runs from the southern county line to the Oregon border.

The Sage Stage is a dial-a-ride service providing trips within Modoc County. It has also provided trips as far away as Klamath Falls, Oregon, and Reno, Nevada.

The population ranking of the following table is based on the 2010 census of Modoc County.

All content from Kiddle encyclopedia articles (including the article images and facts) can be freely used under Attribution-ShareAlike license, unless stated otherwise. Cite this article:
Modoc County, California Facts for Kids. Kiddle Encyclopedia.