Plush is an unincorporated rural community in the Warner Valley of Lake County, in the U.S. state of Oregon. The community is in an arid, sparsely populated part of the state about 37 miles (60 km) northeast of Lakeview. The valley surrounding Plush contains many marshes and shallow lakes, most of them intermittent.

Frequented by Native Americans for many thousands of years, the valley became a region of sheep grazing and cattle ranching by the late 19th century. Plush's infrastructure includes a store, an elementary school, and a church. Nearby attractions include Hart Mountain National Antelope Refuge, Warner Wetlands, and the Oregon Sunstone Public Collection Area.

People have lived in the Warner Valley for more than 10,000 years. Evidence of Native American occupation includes petroglyphs, hunting blinds, flakes from obsidian tools, and other material artifacts. By historic times, the Kidütökadö band of Northern Paiute frequented the valley and the uplands of Hart Mountain, the fault block ridge to the east.

The Euro-American settler community of Plush developed in the late 19th century around sheep grazing and small cattle ranches. Catholics from Ireland found work here as shepherds; their surnames and their churches are part of the regional heritage.

The name Plush is said to have derived from a mispronunciation of the word flush during a 19th century poker game played in the community. The Plush post office was established in 1888, and David R. Jones was the first postmaster. Daniel Boone, a relative of the famous Kentucky pathfinder of the same name, became postmaster in 1898 and opened a general store in conjunction with the post office. 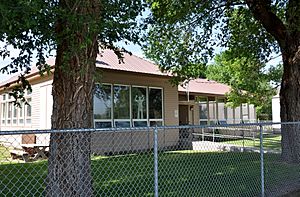 By highway, Plush is about 37 miles (60 km) northeast of Lakeview and 18 miles (29 km) north of Adel in the Warner Valley of south-central Oregon. Plush–Adel Road runs north–south along the valley floor, while Plush Cutoff links Plush to Oregon Route 140 west of Adel. Hogback Road runs north from Plush, while Hart Mountain Road, which terminates in Plush, runs east and northeast to the Warner Wetlands Area of Critical Environmental Concern and the Hart Mountain National Antelope Refuge.

Hart Lake, at the base of Hart Mountain, is about 1 mile (2 km) east of the community. Honey Creek flows generally east from near the south end of Abert Rim through Plush and into the lake.

Plush is also near a large Oregon sunstone gemfield, which is partly on private land and partly on public land. The Oregon Sunstone Public Collection Area, overseen by the Bureau of Land Management, is about 25 miles (40 km) north of Plush. It allows amateur geologists (rockhounds) to remove sunstones—feldspar crystals that formed in lava beds over the past 13 to 14 million years. Sunstone is the Oregon state gemstone. 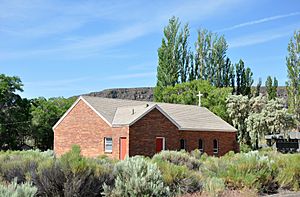 According to the Köppen Climate Classification system, Plush has a semi-arid climate, abbreviated "BSk" on climate maps. On average, about 7 inches (180 mm) of precipitation falls on Plush each year. July is the warmest month with an average high temperature of about 87 °F (31 °C). January is the coldest, when low temperatures average about 20 °F (−7 °C).

All content from Kiddle encyclopedia articles (including the article images and facts) can be freely used under Attribution-ShareAlike license, unless stated otherwise. Cite this article:
Plush, Oregon Facts for Kids. Kiddle Encyclopedia.