Summer Lake Hot Springs are natural hot springs at the south end of Summer Lake in south-central Oregon. They are artesian mineral springs with four surface sources. The springs have complex water chemistry. The temperature of the main source is approximately 123 °F (51 °C) with a water flow of approximately 20 US gallons (76 L) per minute. Over the years, the site has been developed as a rustic family bathing and relaxation resort. The hot springs are 124 miles (200 km) southeast of Bend, Oregon, near the small town of Paisley, Oregon.

Summer Lake Hot Springs are natural artesian springs that emit geothermally heated groundwater with a complex mineral content. In 1908, the United States Geological Survey reported that the hot springs were probably the result of faulting, noting that the springs were located at the base of a mountain with a steep rim rock face. Later, the Geological Survey identified the geology below the springs as lake sediment overlaying basalt rock. Eventually, four separate springs were identified at the site.

The soil around Summer Lake is mostly layered lakebed sand and silt sediments. The soil deposits are several hundred feet deep. On the surface, winds transport sand and soil particles across the Summer Lake playa, creating dunes along the shoreline of the lake. The landscape’s plant life is dominated by desert shrubs, primarily big sagebrush, green rabbitbrush, and black greasewood.

There are 250 bird species found in the Summer Lake Valley. As a result, the area around Summer Lake Hot Springs is an excellent place for birdwatching. Summer Lake is an important stop on the Pacific flyway, so migrating waterfowl pass through the area twice a year. This includes Canada geese, snow geese, swans, mallards, cinnamon teal, and other duck species. Many shore birds are also common in the area, including American avocets, snowy plovers, black-necked stilts, willets, Wilson's phalaropes, great egrets, and sandhill cranes. Among the smaller birds, cliff swallows are common. Local birds of prey include great horned owls, red-tailed hawks, and golden eagles.

Native Americans occupied the area around Summer Lake Hot Springs for at least 14,000 years. Evidence of this was found in the Paisley Caves, which are located just a few miles east of the springs. To Native Americans, the artesian hot springs at the south end of Summer Lake were known as Medicine Springs. In 1843, Captain John C. Fremont passed near the springs while exploring south central Oregon. It was Fremont who named the large alkaline lake just north of the hot springs, Summer Lake. The hot springs are named after the lake. 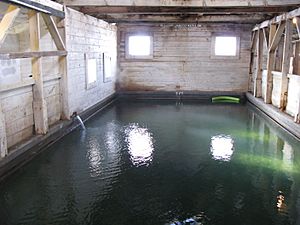 The Summer Lake Hot Springs bathhouse was built in 1928. It is a rustic wood frame structure covered with corrugated tin panels. Inside the building there is a 15-by-30-foot (4.6 m × 9.1 m) bathing pool along with men's and women's dressing rooms.

While Summer Lake Hot Springs had long been used for bathing, the site was not developed into a commercial resort until 1959. The project that began resort development was undertaken by Jeff McDaniel shortly after he bought the hot springs property from Ray Gibson. McDaniel kept the original bathhouse while adding several cottages and a barn. He also installed hook-ups to accommodate travel trailers and recreational vehicles. McDaniel and his wife ran the resort until 1985, when the operation was taken over by their son. He sold the hot springs to Duane Graham in 1997.

After purchasing the 145-acre (59 ha) property, Graham continued to develop the resort around the old bathhouse. Today, the bathing facilities include the original bathhouse and two outdoor hot water bathing pools. The overnight accommodations consist of rental cottages and duplexes, studio cabins, recreational vehicle parking spaces, and a tent camping area. Other amenities include picnic tables, fire pits, and a public restroom and shower building. The resort property also has several ponds as well as nature trails for hikers.

Over the years, the Summer Lake Hot Springs resort has hosted a number of festivals, concerts, and other events. From 2006 to 2014, the Coyote Festival was held in mid-summer while the Outback Music Festival was an annual fall event. These festivals featured folk, rock, and bluegrass musicians from around Oregon. Other events held at the site included astronomy, yoga, and photography workshops.

All content from Kiddle encyclopedia articles (including the article images and facts) can be freely used under Attribution-ShareAlike license, unless stated otherwise. Cite this article:
Summer Lake Hot Springs Facts for Kids. Kiddle Encyclopedia.