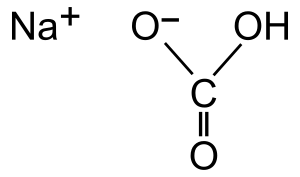 The bicarbonate anion is formed with a carbon double-bonded to an oxygen, single-bonded to a hydroxide group, which here is neutral, and single-bonded to another oxygen which requires one more electron to complete its outer shell. Here, the sodium cation provides the electron, resulting in a net -1 charge.

Bicarbonate is an anion (a negatively-charged ion). Its chemical formula is HCO3−. It reacts with acids to produce carbon dioxide. A sample compound is sodium bicarbonate. It forms carbonate when heated.

All content from Kiddle encyclopedia articles (including the article images and facts) can be freely used under Attribution-ShareAlike license, unless stated otherwise. Cite this article:
Bicarbonate Facts for Kids. Kiddle Encyclopedia.