Ord's kangaroo rat (Dipodomys ordii) is a kangaroo rat native to western North America, specifically the Great Plains and the Great Basin, with its range extending from extreme southern Canada to central Mexico.

Ord's kangaroo rat has a fifth toe on its hind feet, which distinguishes it from Dipodomys elator. It is bicolored with gold-brown dorsal hair and a white stomach. It has a long tail with a bushy tip, and is dark dorsally and ventrally with a white lateral stripe. Its hind feet are modified for jumping, and exceed 35 mm in length, and its total length exceeds 240 mm. Its tail is usually less than 160 mm, distinguishing it from D. elator (which exceeds 160 mm).

Though a common species in the United States, the population in Canada is considered endangered.

The currently accepted scientific name for Ord's kangaroo rat is Dipodomys ordii Woodhouse. It belongs to the family Heteromyidae, kangaroo rats and mice. Hall listed 35 subspecies, but Kennedy and Schnell reported many of these subspecies are probably not legitimate since they were based on the assumption of little sexual dimorphism in the species. It has now been established that sexual dimorphism within the taxon is considerable.

Removal experiments to establish single species populations of kangaroo rats were unsuccessful, since many kangaroo rats are transient and quickly occupy vacated habitats. Only one adult occupies a given burrow system, except for a brief period during breeding activity. Little territoriality occurs above ground except near burrow entrances, which are defended.

Even in shrub-dominated communities, heteromyids including Ord's kangaroo rat tend to concentrate their activity in open areas between shrubs.

Ord's kangaroo rats dig shallow burrows in loose sand in the sides of natural sand dunes, riverbanks, or road cuts. The one central burrow is surrounded by trails to feeding areas. The burrows have 3-in-diameter (7.6-cm-dia) openings. Small mounds are usually formed outside the entrance to the burrow. The burrow opening is usually plugged with soil during the day to maintain temperature and humidity within tolerable levels. They scoop out small, shallow depressions to be used as dusting spots. 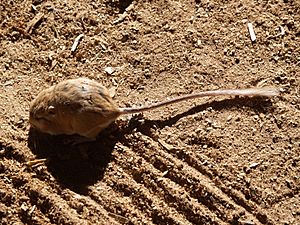 Ord's kangaroo rats are nocturnal, and spend their days in deep burrows. Males are usually more abundant and active than females. Activity increases under cloud cover, particularly in winter. Ord's kangaroo rats are active year-round in Texas, but further north, they are seldom seen above ground in cold weather.

Ord's kangaroo rat breeding season varies with subspecies and area. Usually, one or two peak breeding seasons occur per year, and in many areas, some breeding activity occurs year-round. The size of ovaries is significantly positively correlated with temperature. The average length of the breeding period is 6.8 months. In Texas, males are fertile all year, with peak reproductive activity occurring between August and March. Higher reproductive rates are associated with increased precipitation and food supply and decreased population density. In a favorable growing season, most females breed at least twice a year, but when population density increased, females did not breed until November though growing conditions and food supplies were favorable. In Arizona, the lowest proportion of males in breeding condition (about 60% of the male population) occurred in January and September–October. The lowest number of females in breeding condition occurred in November, but at least a few females were breeding at that time. In Oklahoma, the two peaks in breeding activity are August–September and December through March. In many areas, the onset of breeding activity follows a period of rainfall the previous month.

Ord's kangaroo rats are primarily granivorous and herbivorous. They consume a variety of foods, but most commonly eat the seeds of grasses and forbs, green vegetation, and dry vegetation. They occasionally consume animal material, mostly arthropods. In Colorado, seeds comprised 74% of their diets, forbs 13%, grasses and sedges 5%, arthropods 4%, and fungi and mosses 2%.

Kangaroo rats are physiologically adapted to arid environments. Most water is obtained from seeds and succulent plants. They drink water when it is available, but apparently do not require free water.

All content from Kiddle encyclopedia articles (including the article images and facts) can be freely used under Attribution-ShareAlike license, unless stated otherwise. Cite this article:
Ord's kangaroo rat Facts for Kids. Kiddle Encyclopedia.