Valley Falls is a small unincorporated community in Lake County, Oregon, United States. The settled area is located at the junction of U.S. Route 395 and Oregon Route 31. The community is named for a small falls on the Chewaucan River just north of the occupied site. East of Valley Falls, the cliff face of Abert Rim overlooks the community.

The area around Valley Falls was occupied by Native Americans for up to 11,000 years prior to the arrival of white settlers. Archaeological evidence shows that the peak period for use by native tribes was between 2,000 and 500 years ago. During that period, the people who lived in the Valley Falls area were probably ancestors of the Klamath and Modoc peoples. Most of these Native Americans lived in pit-houses along the shore of Abert Lake, just north of Valley Falls. There are also a number of ancient petroglyphs near Valley Falls. The Abert Lake Petroglyphs, at the foot of Abert Rim, are thought to be over 10,000 years old.

The unincorporated community of Valley Falls is located at the junction of U.S. Route 395 and Oregon Route 31 in the high desert country of Lake County in south-central Oregon. There are only five structures at the site. The main business is a combined gas station and store, located on the west side of the highway, south of the junction. There is also a recreational vehicle park and a guest ranch nearby. Valley Falls is 23 miles (37 km) north of Lakeview, Oregon, on Route 395; 23 miles (37 km) southeast of Paisley, Oregon, on Route 31; and 116 miles (187 km) southwest of Burns, Oregon, on Route 395. 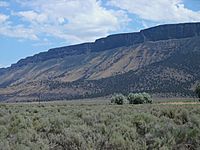 Abert Rim is approximately one mile east of Valley Falls. The rim is one of the highest escarpments in the United States, rising 2,500 feet (760 m) above the valley floor. The top 800 feet (240 m) is a sheer-cliff. The rim cliff runs over 30 miles (48 km) from north to south, making it the longest exposed block fault scarp in North America. The rim is basalt, formed by large lava flows during the Miocene epoch. After the lava flows stopped, large blocks faults broke and tilted the land. Abert Rim is the result of one of those giant faults.

From Valley Falls, visitors have an unobstructed view of Abert Rim's cliff face. Along the highway just south of the Valley Falls, there is an Outback Scenic Byway kiosk that explains how Abert Rim was formed. There are also two geological information signs north of Valley Falls, one on Route 395 and the other on Route 31.

The United States Geological Survey identifies Valley Falls as a "populated place". That is "a place or area with clustered or scattered buildings and a permanent human population. A populated place is usually not incorporated and by definition has no legal boundaries." United States Census data are not available for Valley Falls. The Valley Falls area is part of the Summer Lake Census County Division, but specific census data for the community are not presented in 2010 census reports.

All content from Kiddle encyclopedia articles (including the article images and facts) can be freely used under Attribution-ShareAlike license, unless stated otherwise. Cite this article:
Valley Falls, Oregon Facts for Kids. Kiddle Encyclopedia.