Phantom Ship is a small island in Crater Lake in the U.S. state of Oregon. It is a natural rock formation pillar which derives its name from its resemblance to a ghost ship, especially in foggy and low-light conditions. 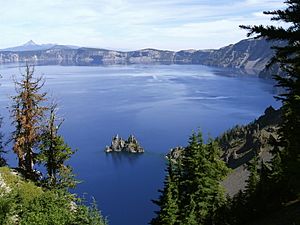 Phantom Ship Island is mainly formed from andesite rock that dates from about 400,000 years ago, partly altered by hydrothermal activity. The island is situated on the south east end of Crater Lake and projects more than 200 m (656 ft) out from the wall of the caldera. The island is about 500 ft by 200 ft in size. The vegetation is similar to that on Wizard Island except for the lodgepole pine (Pinus contorta) which is absent on Phantom Ship Island.

All content from Kiddle encyclopedia articles (including the article images and facts) can be freely used under Attribution-ShareAlike license, unless stated otherwise. Cite this article:
Phantom Ship (island) Facts for Kids. Kiddle Encyclopedia.