Pikas are small mammals that resemble chinchillas. Chinchillas are rodents, but pikas are related to the hare and the rabbit, they are lagomorphs. Pikas are also known as rock rabbits or coneys. There are 30 different species of pika.

Most Pikas live in colder climates, on rocky mountain slopes, in Asia, North America and parts of Eastern Europe. They are active during the day or the twilight, that is at nightfall, and in early morning. Pikas do not hibernate. They collect hay, which they pile up to dry. They sometimes steal hay from each other. This often results in disputes. Predators, like ferrets, and large birds often use such disputes to catch pikas.

Pikas in Eurasia lead their lives in family groups, they also share their duties. The pikas in North America don't, they are asocial outside the breeding season. 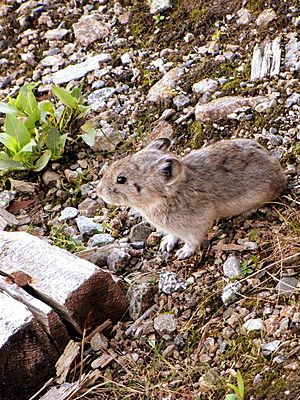 Pikas are native to cold climates, mostly in Asia, North America, and parts of Eastern Europe. Most species live on rocky mountainsides, where there are numerous crevices in which to shelter, although some pikas also construct crude burrows. A few burrowing species are native to open steppe land. In the mountains of Eurasia, pikas often share their burrows with snowfinches, which build their nests there. Pikas require cold temperatures to live, and can die if exposed to temperatures above 77.9 °F (25.5 °C). Changing temperatures have forced some pika populations to restrict their ranges to even higher elevations. 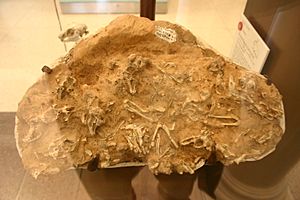 Pikas are small mammals, with short limbs and rounded ears. They are about 15 to 23 centimetres (5.9 to 9.1 in) in body length and weigh between 120 and 350 grams (4.2 and 12.3 oz), depending on species. Like rabbits, after eating they initially produce soft green feces, which they eat again to take in further nutrition, before producing the final, solid, fecal pellets. Some pikas, such as the collared pika, have been known to store dead birds in their burrows for food during winter.

These animals are herbivores, and feed on a wide variety of plant matter, including forbs, grasses, sedges, shrub twigs, moss, and lichen. As with other lagomorphs, pikas have gnawing incisors and no canines, although they have fewer molars than rabbits, and have a dental formula of: 2.0.3.21.0.2.3

Rock-dwelling pikas have small litters of fewer than five young, while the burrowing species tend to give birth to more young, and to breed more frequently, possibly due to a greater availability of resources in their native habitats. The young are born after a gestation period of between 25 and 30 days. 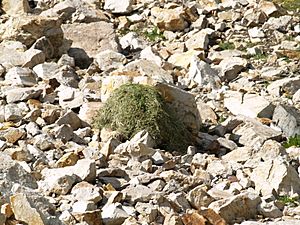 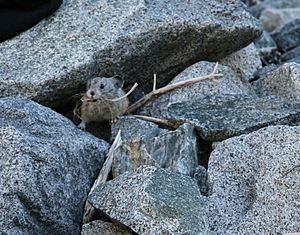 Pikas are diurnal or crepuscular, with higher-elevation species generally being more active during the daytime. They show their peak activity just before the winter season. Pikas do not hibernate, so they generally spend time during the summer collecting and storing food they will eat over the winter. Each rock-dwelling pika stores its own "haypile" of dried vegetation, while burrowing species often share food stores with their burrow mates. Haying behavior is more prominent at higher elevations. Many of the vocalizations and social behaviors that pikas exhibit are related to haypile defense.

Pikas have distinct calls that vary in duration. The call can either be short and quick, a little longer and more drawn out, or they can be songs. The short calls are an example of geographic variation. The pikas determine the appropriate time to make short calls by listening for cues for sound localization. The calls are used for individual recognition, predator warning signals, territory defense, or as a way to attract the opposite sex. There are also different calls depending on the season. In the spring, the songs become more frequent during the breeding season. In late summer, the vocalizations become short calls. Through various studies, the acoustic characteristics of the vocalizations can be a useful taxonomic tool.

The average lifespan in pikas is roughly seven years in the wild. A pika's age is determined by the number of adhesion lines on the periosteal bone on the lower jaw. The lifespan does not differ between the sexes.

All content from Kiddle encyclopedia articles (including the article images and facts) can be freely used under Attribution-ShareAlike license, unless stated otherwise. Cite this article:
Pika Facts for Kids. Kiddle Encyclopedia.