The Nēnē, or Hawaiian Goose (Branta sandvicensis) is a species of goose. It is found today on only three Hawaiian islands. It gets its name from its soft call.

This is an unmistakable species, with its generally brown plumage (feathers) and darker head. Its strong toes have much reduced webbing (skin between the toes), an adjustment to the lava flows on which it breeds. The Nēnē goes about on land much more than other water birds. When moulting (dropping old feathers and growing new ones), the Nēnē cannot fly, as do other geese, a factor which made it vulnerable to hunting.

The Nēnē was once among the most threatened waterfowl species around the world. Once common, hunting and predators brought to the islands such as mongooses, pigs and cats reduced the population to only 30 birds in the 1950s. However, this species breeds well in captivity (zoos and bird parks), and has been successfully re-introduced. There are also good numbers in wild bird collections.

The Nēnē is the state bird of Hawaii. 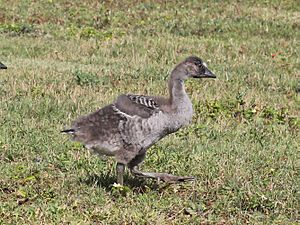 The nene is a medium-sized goose at 41 cm (16 in) tall. Although they spend most of their time on the ground, they are capable of flight, with some individuals flying daily between nesting and feeding areas. Females have a mass of 1.525–2.56 kg (3.36–5.64 lb), while males average 1.695–3.05 kg (3.74–6.72 lb), 11% larger than females. Adult males have a black head and hindneck, buff cheeks and heavily furrowed neck. The neck has black and white diagonal stripes. Aside from being smaller, the female Nene is similar to the male in colouration. The adult's bill, legs and feet are black. It has soft feathers under its chin. Goslings resemble the male, but are a duller brown and with less demarcation between the colors of the head and neck, and striping and barring effects are much reduced.

The nene is an inhabitant of shrubland, grassland, coastal dunes, and lava plains, and related anthropogenic habitats such as pasture and golf courses from sea level to as much as 2,400 m (7,900 ft). Some populations migrated between lowland breeding grounds and montane foraging areas.

The nene could at one time be found on the islands of Hawaiʻi, Maui, Kahoʻolawe, Lānaʻi, Molokaʻi, and Kauaʻi. Today, its range is restricted to Hawaiʻi, Maui, Molokaʻi, and Kauaʻi. A pair arrived at the James Campbell National Wildlife Refuge on Oʻahu in January 2014; two of their offspring survived and are seen regularly on the nearby golf courses at Turtle Bay Resort. 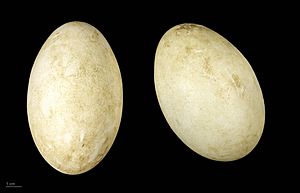 The breeding season of the nene, from August to April, is longer than that of any other goose; most eggs are laid between November and January. Unlike most other waterfowl, the nene mates on land. Nests are built by females on a site of her choosing, in which one to five eggs are laid (average is three on Maui and Hawaiʻi, four on Kauaʻi). Females incubate the eggs for 29 to 32 days, while the male acts as a sentry. Goslings are precocial, able to feed on their own; they remain with their parents until the following breeding season.

The nene is a herbivore that will either graze or browse, depending on the availability of vegetation. Food items include the leaves, seeds, fruit, and flowers of grasses and shrubs.

The nene is the world's rarest goose. It is believed that it was once common, with approximately 25,000 Hawaiian geese living in Hawaiʻi when Captain James Cook arrived in 1778. Hunting and introduced predators, such as small Asian mongooses, pigs, and cats, reduced the population to 30 birds by 1952. The species breeds well in captivity, and has been successfully re-introduced. In 2004, it was estimated that there were 800 birds in the wild, as well as 1,000 in wildfowl collections and zoos. There is concern about inbreeding due to the small initial population of birds. The nature reserve WWT Slimbridge, in England, was instrumental in the successful breeding of Hawaiian geese in captivity. Under the direction of conservationist Peter Scott, it was bred back from the brink of extinction during the 1950s for later re-introduction into the wild in Hawaiʻi. There are still Hawaiian geese at Slimbridge today. They can now be found in captivity in every WWT centre. Successful introductions include Haleakala and Piʻiholo ranches on Maui. The nene population stands at 2,500 birds.

All content from Kiddle encyclopedia articles (including the article images and facts) can be freely used under Attribution-ShareAlike license, unless stated otherwise. Cite this article:
Nene (bird) Facts for Kids. Kiddle Encyclopedia.