Kīlauea Point, a narrow, lava peninsula protruding from the northern shore of Kauaʻi, was purchased from the Kīlauea Sugar Plantation Company in 1909 for one US dollar.

Before construction could begin, a method for delivering supplies to the point had to be developed. Due to the lack of good roads from the Nawiliwili harbor, the decision was made to bring the materials in by sea. The lighthouse tender Kukui would anchor offshore and then dispatch small boats with supplies to a cove near the point. Since there was no beach landing, the boats would anchor to cleats cemented into the lava rocks at the point. A boom derrick, constructed on a ledge above the water, would lift the supplies from the boats and place them on a loading platform 110 feet (34 m) above the water.

Finally, after almost four years of planning, construction began in July 1912 and the light was dedicated on May 1, 1913. The tower was built in a Classical Revival architecture style out of reinforced concrete. The tower is a slightly tapering cylinder about 52 feet (16 m) high. The upper portion has a steel circular walkway with handrail. The lens is one of only seven second-order Fresnel lenses remaining in a lighthouse in the US. Barbier, Bernard, and Turenne manufactured the lens in Paris, France. The 9,000-pound (4,100 kg) lens floated on mercury and compressed air. The lens was rotated by a system of pulleys powered by weights that needed to be reset by an operator every 3.5 hours. An oil storage house was built 155 feet (47 m) southeast of the light, and a small engine house in a small cove below the point. About 1,000 feet (300 m) south is a residential area with three small stone houses. Each house and the lighthouse itself has a water storage tank.

The point is accessed from Route 56 (called Kuhio Highway), north of the town of Kīlauea. On June 29, 1927, the United States Army Air Corps pilots of the airplane Bird of Paradise, Lester J. Maitland and Albert F. Hegenberger, were attempting the first transpacific flight from California to Hawaii. An hour before dawn, aware that they were slightly north of their planned course and with their directional radio receiver not functioning, they spotted the Kīlauea Lighthouse as planned to verify their position.

A radio beacon was added in 1930, and with the added generator the light was changed to be powered by electricity. Originally 250,000 candle power, the light reached 2,500,000 candle power in 1958. The station was manned until 1974 when it was automated. In February 1976 the light was moved to a nearby smaller tower and the tower was sealed. It was one of the last lights converted to automation by the United States Coast Guard in the Hawaiian Islands. The radio beacon was replaced in 1956, and then in the 1980s converted to a visitor center. It was added to the National Register of Historic Places listings in Hawaii in 1979. The historic district included 31 acres (13 ha). 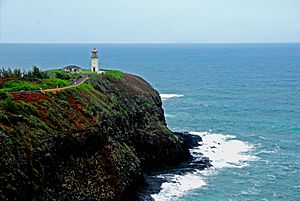 In 1985 the Kīlauea Point National Wildlife Refuge, starting with the original Coast Guard Station, and then expanding to preserve the surrounding habitat. A new visitor center was built in 1988. The buildings were damaged by Hurricane Iniki in September 1992, but repaired. The visitors center is operated by the Kīlauea Point Natural History Association. Starting in late 2008, the group raised funds for restoration of the lighthouse.

All content from Kiddle encyclopedia articles (including the article images and facts) can be freely used under Attribution-ShareAlike license, unless stated otherwise. Cite this article:
Kilauea Light Facts for Kids. Kiddle Encyclopedia.