Congaree National Park is a 26,276-acre (41.1 sq mi; 106.3 km2) American national park in central South Carolina, 18 miles south-west of the state capital, Columbia. The park preserves the largest tract of old growth bottomland hardwood forest left in the United States. The lush trees growing in its floodplain forest are some of the tallest in the eastern United States, forming one of the highest temperate deciduous forest canopies remaining in the world. The Congaree River flows through the park. About 15,000 acres (23.4 sq mi; 60.7 km2) are designated as a wilderness area.

The park received its official designation in 2003 as the culmination of a grassroots campaign that began in 1969. With 145,929 visitors in 2018, it ranks as the United States' 10th-least visited national park, just behind Nevada's Great Basin National Park.

Resource extraction on the Congaree River centered on cypress logging from 1898, when the Santee River Cypress Logging Company began to operate in the area of what is now the park. Owned by Francis Beidler and Benjamin F. Ferguson of Chicago, the company operated until 1914; subsequently, Beidler and his heirs retained ownership of the area. In the 1950s Harry R. E. Hampton was a member of the Cedar Creek Hunt Club and co-editor of The State. Hampton joined with Peter Manigault at the Charleston The Post and Courier to advocate preservation of the Congaree floodplain. Hampton formed the Beidler Forest Preservation Association in 1961. As a result of this advocacy a 1963 study by the National Park Service reported favorably on the establishment of a national monument.

No progress was made in the 1960s. Renewed logging by the Beidlers in 1969 prompted the 1972 formation of the Congaree Swamp National Preserve Association (CSNPA). The CSNPA joined forces with the Sierra Club and other conservation organizations to promote federal legislation to preserve the tract. South Carolina Senators Strom Thurmond and Ernest F. Hollings introduced legislation in 1975 for the establishment of a national preserve. On October 18, 1976 legislation was passed to create Congaree Swamp National Monument. An expansion plan was introduced by Hollings and Thurmond in 1988, expanding the monument to 22,200 acres (34.7 sq mi; 89.8 km2).

Conversion to a national park 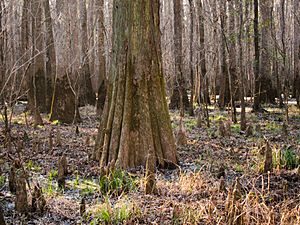 The park preserves a significant part of the Middle Atlantic coastal forests ecoregion. Although it is frequently referred to as a swamp, it is largely bottomland subject to periodic inundation by floodwaters. 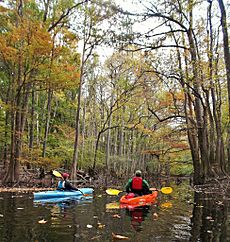 In addition to being a designated wilderness area, a UNESCO biosphere reserve, an important bird area and a national natural landmark, Congaree National Park features primitive campsites and offers hiking, canoeing, kayaking, and bird watching. The park is also a popular spot for watching firefly displays on summer evenings. Primitive and backcountry camping are available. Some of the hiking trails include the Bluff Trail (0.7 mi), Weston Lake Loop Trail (4.6 mi), Oakridge Trail (7.5 mi), and King Snake Trail (11.1 mi) where hikers may spot deer, raccoon, opossum, and even bobcat tracks. The National Park Service rangers have current trail conditions which can be found in the Harry Hampton Visitor Center. Along with hiking trails, the park also has a 20-mile (32 km) marked canoe trail on Cedar Creek.

Most visitors to the park walk along the Boardwalk Loop, an elevated 2.4-mile (3.9 km) walkway through the swampy environment that protects delicate fungi and plant life at ground level. Congaree boasts both the tallest (169 ft, 51.4m) and largest (42 cubic meters) loblolly pines (Pinus taeda) alive today as well as several cypress trees well over 500 years old. The Harry Hampton Visitor Center features exhibits about the natural history of the park, and the efforts to protect the swamp.

Monthly volunteer-led hikes are offered on some of the longer trails to give visitors an opportunity to get off the boardwalk and up close to nature.

According to the Köppen climate classification system, the Harry Hampton Visitor Center at Congaree National Park has a Humid subtropical climate (Cfa). 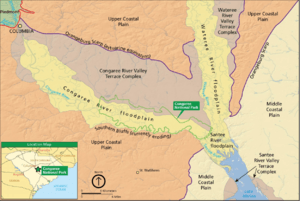 Geologic map of the park

The park resides entirely within the Congaree River Floodplain Complex with flood deposits of sand, silt, and clay. Muck and peat are the products of vegetation decay. The meander of the river has produced distinctive oxbow lakes. North of the park is the NE-SW regional trending Augusta Fault and the Terrace Complex consisting of Pliocene fluvial terraces. South of the park is the Southern Bluffs, which have been eroding since the Late Pleistocene. West of the park is the Fall Line and Piedmont.

In 2008, South Carolina Educational Television (SCETV) produced a documentary on the history of the Congaree National Park titled Roots in the River: The Story of Congaree National Park. The documentary featured interviews with people involved in the movement that eventually led to the area's U.S. National Monument status, and observed the role the park plays in the surrounding community of the Lower Richland County area of South Carolina. The program first aired on the SCETV network in September 2009.

All content from Kiddle encyclopedia articles (including the article images and facts) can be freely used under Attribution-ShareAlike license, unless stated otherwise. Cite this article:
Congaree National Park Facts for Kids. Kiddle Encyclopedia.