As governor of South Carolina from January 20, 1959 to January 15, 1963, Hollings worked to improve the state's educational system, helping to bring more industry and employment opportunities to the state. His term in office saw the establishment of the state's technical education system and its educational television network. He also called for and achieved significant increases in teachers' salaries, bringing them closer to the regional average. At the 1961 Governor's Conference on Business, Industry, Education and Agriculture in Columbia, S.C., he declared, "Today, in our complex society, education is the cornerstone upon which economic development must be built--and prosperity assured."

He tried to win the Democratic nomination for a seat in the U.S. Senate in 1962 but lost to incumbent Olin D. Johnston. 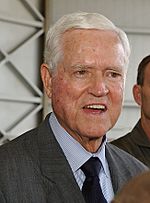 For 36 years (until January 2003), he served alongside Republican Strom Thurmond, making them the longest-serving Senate duo ever. This made him the longest-serving junior senator ever, even though he had more seniority than all but a few of his colleagues. Thurmond and Hollings generally had a good relationship despite their sometimes sharp philosophical differences, and frequently collaborated on legislation and projects to benefit South Carolina. Only Thurmond, Robert Byrd, Ted Kennedy, Daniel Inouye, Carl Hayden, John Stennis and Ted Stevens served longer in the Senate than Hollings.

Hollings remained very popular in South Carolina over the years, even as the state became increasingly friendly to Republicans at the national level. In his first three bids for a full term, he never dropped below 60 percent of the vote. In the 1992 election, however, he faced an unexpectedly close race against former Congressman Tommy Hartnett in what was otherwise a very good year for Democrats nationally. Hartnett had represented the Charleston area in Congress from 1981 to 1987, thus making him Hollings' congressman. His appeal in the Lowcountry — traditionally a swing region at the state level — enabled him to hold Hollings to only 50 percent of the vote.

Hollings tried to seek the Democratic lead running mate during the 1984 Presidential race. He lost to Walter Mondale.

Hollings was married to Martha Patricia Salley until they divorced. Then he was married to Rita Liddy from 1971 until her death in 2012. He had four children with Patricia. He lived in Charleston, South Carolina.

All content from Kiddle encyclopedia articles (including the article images and facts) can be freely used under Attribution-ShareAlike license, unless stated otherwise. Cite this article:
Ernest Hollings Facts for Kids. Kiddle Encyclopedia.