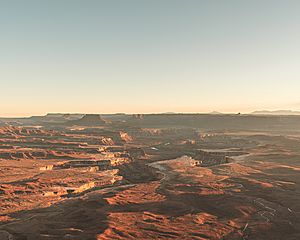 A scenic view from the Green River Overlook within the park

Canyonlands National Park is an American national park located in southeastern Utah near the town of Moab. The park preserves a colorful landscape eroded into numerous canyons, mesas, and buttes by the Colorado River, the Green River, and their respective tributaries. Legislation creating the park was signed into law by President Lyndon Johnson on September 12, 1964.

The park is divided into four districts: the Island in the Sky, the Needles, the Maze, and the combined rivers—the Green and Colorado—which carved two large canyons into the Colorado Plateau. While these areas share a primitive desert atmosphere, each retains its own character. Author Edward Abbey, a frequent visitor, described the Canyonlands as "the most weird, wonderful, magical place on earth—there is nothing else like it anywhere."

In the early 1950s, Bates Wilson, then superintendent of Arches National Monument, began exploring the area to the south and west of Moab, Utah. After seeing what is now known as the Needles District of Canyonlands National Park, Wilson began advocating for the establishment of a new national park that would include the Needles. Additional explorations by Wilson and others expanded the areas proposed for inclusion into the new national park to include the confluence of Green and Colorado rivers, the Maze District, and Horseshoe Canyon.

In 1961, Secretary of the Interior Stewart Udall was scheduled to address a conference at Grand Canyon National Park. On his flight to the conference, he flew over the Confluence (where the Colorado and Green rivers meet). The view apparently sparked Udall's interest in Wilson's proposal for a new national park in that area and Udall began promoting the establishment of Canyonlands National Park.

Utah Senator Frank Moss first introduced legislation into Congress to create Canyonlands National Park. His legislation attempted to satisfy both nature preservationists' and commercial developers' interests. Over the next four years, his proposal was struck down, debated, revised, and reintroduced to Congress many times before being passed and signed into creation.

In September, 1964, after several years of debate, President Lyndon B. Johnson signed Pub.L. 88-590, which established Canyonlands National Park as a new national park. Bates Wilson became the first superintendent of the new park and is often referred to as the "Father of Canyonlands."

Canyonlands is a popular recreational destination. Since 2007, more than 400,000 people have visited the park each year with a record of 776,218 visitors in 2016, representing a 22 percent increase from the prior year. The geography of the park is well suited to a number of different recreational uses. Hikers, mountain bikers, backpackers, and four-wheelers all enjoy traveling the rugged, remote trails within the Park. The White Rim Road traverses the White Rim Sandstone level of the park between the rivers and the Island in the Sky. Since 2015, day-use permits must be obtained before travelling on the White Rim Road due to the increasing popularity of driving and bicycling along it. The park service's intent is to provide a better wilderness experience for all visitors while minimizing impacts on the natural surroundings. 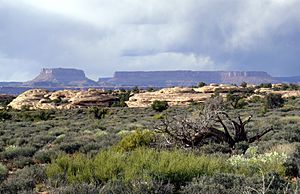 Rafters and kayakers float the calm stretches of the Green River and Colorado River above the Confluence. Below the Confluence, Cataract Canyon contains powerful whitewater rapids, similar to those found in the Grand Canyon. However, since there is no large impoundment on the Colorado River above Canyonlands National Park, river flow through the Confluence is determined by snowmelt, not management. As a result, and in combination with Cataract Canyon's unique graben geology, this stretch of river offers the largest whitewater in North America in heavy snow years.

Political compromise at the time of the park's creation limited the protected area to an arbitrary portion of the Canyonlands basin. Conservationists hope to complete the park by bringing the boundaries up to the high sandstone rims that form the natural border of the Canyonlands landscape.

On March 27, 2020, Canyonlands National Park was closed to help prevent the spread of COVID-19. 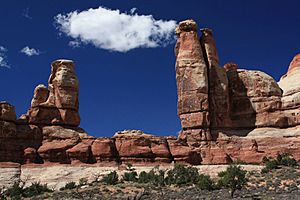 Chesler Park in the Needles

The Island in the Sky district is a broad and level mesa in the northern section of the park, between the Colorado and Green rivers. The district has many viewpoints overlooking the White Rim, a sandstone bench 1,200 feet (370 m) below the Island, and the rivers, which are another 1,000 feet (300 m) below the White Rim.

The Needles district is located south of the Island in the Sky, on the east side of the Colorado River. The district is named for the red and white banded rock pinnacles which are a major feature of the area. Various other naturally sculpted rock formations are also within this district, including grabens, potholes, and arches. Unlike Arches National Park, where many arches are accessible by short to moderate hikes, most of the arches in the Needles district lie in backcountry canyons, requiring long hikes or four-wheel drive trips to reach them.

The Ancestral Puebloans inhabited this area and some of their stone and mud dwellings are well-preserved, although the items and tools they used were mostly removed by looters. The Ancestral Puebloans also created rock art in the form of petroglyphs, most notably on Newspaper Rock along the Needles access road. 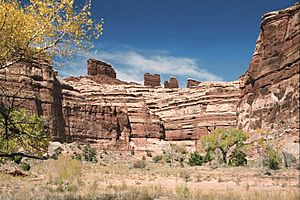 The Chocolate Drops buttes from inside the Maze

The Maze district is located west of the Colorado and Green rivers. The Maze is the least accessible section of the park, and one of the most remote and inaccessible areas of the United States.

A geographically detached section of the park located north of the Maze district, Horseshoe Canyon contains panels of rock art made by hunter-gatherers from the Late Archaic Period (2000-1000 BC) pre-dating the Ancestral Puebloans. Originally called Barrier Canyon, Horseshoe's artifacts, dwellings, pictographs, and murals are some of the oldest in America. The images depicting horses date from after 1540 AD, when the Spanish reintroduced horses to America.

Since the 1950s, scientists have been studying an area of 200 acres (81 ha) completely surrounded by cliffs. The cliffs have prevented cattle from ever grazing on the area's 62 acres (25 ha) of grassland. According to the scientists, the site may contain the largest undisturbed grassland in the Four Corners region. Studies have continued biannually since the mid-1990s. The area has been closed to the public since 1993 to maintain the nearly pristine environment. 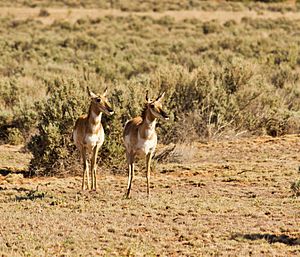 Pronghorns are colloquially referred to as antelope due to their resemblance, but are not closely related to Old World antelopes

At least 273 species of birds inhabit the park. A variety of hawks and eagles are found, including the Cooper's hawk, the northern goshawk, the sharp-shinned hawk, the red-tailed hawk, the golden and bald eagles, the rough-legged hawk, the Swainson's hawk, and the northern harrier. Several species of owls are found, including the great horned owl, the northern saw-whet owl, the western screech owl, and the Mexican spotted owl. Grebes, woodpeckers, ravens, herons, flycatchers, crows, bluebirds, wrens, warblers, blackbirds, orioles, goldfinches, swallows, sparrows, ducks, quail, grouse, pheasants, hummingbirds, falcons, gulls, and ospreys are some of the other birds that can be found.

Several reptiles can be found, including eleven species of lizards and eight species of snake (including the midget faded rattlesnake). The common kingsnake and prairie rattlesnake have been reported in the park, but not confirmed by the National Park Service.

The park is home to six confirmed amphibian species, including the red-spotted toad, Woodhouse's toad, American bullfrog, northern leopard frog, Great Basin spadefoot toad, and tiger salamander. The canyon tree frog was reported to be in the park in 2000, but was not confirmed during a study in 2004. 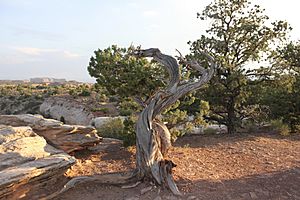 Cryptobiotic soil is the foundation of life in Canyonlands, providing nitrogen fixation and moisture for plant seeds. One footprint can destroy decades of growth.

According to the Köppen climate classification system, Canyonlands National Park has a Cold semi-arid climate (‘’BSk’’). Bsk climates are defined by their coldest month having an average mean temperature below −0 °C (32 °F) and at least 50% of the total annual precipitation being received during the spring and summer. The plant hardiness zones at the Island in the Sky and Needles District Visitor Centers are 7a with an average annual extreme minimum air temperature of 4.0 °F (-15.6 °C) and 2.9 °F (-16.2 °C), respectively.

The National Weather Service has maintained two cooperative weather stations in the park since June 1965. Official data documents the desert climate with less than 10 inches (250 millimetres) of annual rainfall, as well as very warm, mostly dry summers and cold, occasionally wet winters. Snowfall is generally light during the winter. 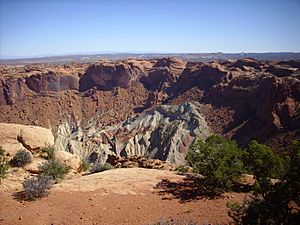 Upheaval Dome is an impact structure, the deeply eroded bottom-most remnants of an impact crater
Main page: Geology of the Canyonlands area

A subsiding basin and nearby uplifting mountain range (the Uncompahgre) existed in the area in Pennsylvanian time. Seawater trapped in the subsiding basin created thick evaporite deposits by Mid Pennsylvanian. This, along with eroded material from the nearby mountain range, became the Paradox Formation, itself a part of the Hermosa Group. Paradox salt beds started to flow later in the Pennsylvanian and probably continued to move until the end of the Jurassic. Some scientists believe Upheaval Dome was created from Paradox salt bed movement, creating a salt dome, but more modern studies show that the meteorite theory is more likely to be correct.

A warm shallow sea again flooded the region near the end of the Pennsylvanian. Fossil-rich limestones, sandstones, and shales of the gray-colored Honaker Trail Formation resulted. A period of erosion then ensued, creating a break in the geologic record called an unconformity. Early in the Permian an advancing sea laid down the Halgaito Shale. Coastal lowlands later returned to the area, forming the Elephant Canyon Formation. 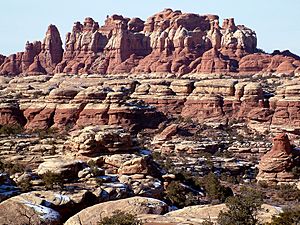 Rock formations in the Needles district

A second unconformity was created after the Permian sea retreated. Flood plains on an expansive lowland covered the eroded surface and mud built up in tidal flats, creating the Moenkopi Formation. Erosion returned, forming a third unconformity. The Chinle Formation was then laid down on top of this eroded surface.

Increasingly dry climates dominated the Triassic. Therefore, sand in the form of sand dunes invaded and became the Wingate Sandstone. For a time climatic conditions became wetter and streams cut channels through the sand dunes, forming the Kayenta Formation. Arid conditions returned to the region with a vengeance; a large desert spread over much of western North America and later became the Navajo Sandstone. A fourth unconformity was created by a period of erosion.

Mud flats returned, forming the Carmel Formation, and the Entrada Sandstone was laid down next. A long period of erosion stripped away most of the San Rafael Group in the area, along with any formations that may have been laid down in the Cretaceous period.

The Laramide orogeny started to uplift the Rocky Mountains 70 million years ago and with it, the Canyonlands region. Erosion intensified and when the Colorado River Canyon reached the salt beds of the Paradox Formation the overlying strata extended toward the river canyon, forming features such as The Grabens. Increased precipitation during the ice ages of the Pleistocene quickened the rate of canyon excavation along with other erosion. Similar types of erosion are ongoing, but occur at a slower rate.

All content from Kiddle encyclopedia articles (including the article images and facts) can be freely used under Attribution-ShareAlike license, unless stated otherwise. Cite this article:
Canyonlands National Park Facts for Kids. Kiddle Encyclopedia.