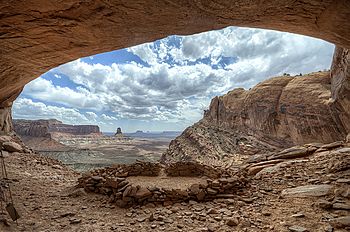 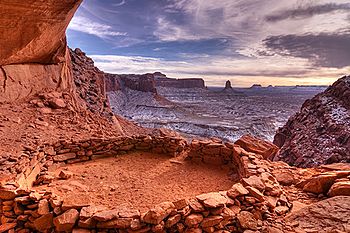 It requires some hiking knowledge or special directions to find.

It has become a popular spot for photographers capturing the Southwest, offering a unique frame for the dramatic thunderstorms or clear skies beyond.

While located in a naturally occurring alcove, the name False Kiva arises from the uncertainty about the circle of stones' origins and purpose, whether it is really an authentic kiva, a location used for religious purposes.

Logan, Utah artist Keith Bond was commissioned in 2006 to paint a landscape for the Senate Chamber of the Utah State Capitol. He painted False Kiva in a mural titled Ancestral Home which hangs on the western end of the ceiling above the senate floor.

A photograph of False Kiva by Wally Pacholka, entitled "A True Image of False Kiva," was featured on NASA's Astronomy Picture of the Day (APOD) on September 29, 2008, giving an almost otherworldly view into the Milky Way.

All content from Kiddle encyclopedia articles (including the article images and facts) can be freely used under Attribution-ShareAlike license, unless stated otherwise. Cite this article:
False Kiva Facts for Kids. Kiddle Encyclopedia.