Logan is a city in Cache County, Utah, United States. As of the 2010 census the population was 48,174, with an estimated population of 48,997 in 2014. Logan is the county seat of Cache County and the principal city of the Logan, UT-ID Metropolitan Statistical Area, which includes Cache County and Franklin County, Idaho. The Logan metropolitan area contained 125,442 people as of the 2010 census. In 2005 and 2007, Morgan Quitno declared the Logan metropolitan area the safest in the United States.

Logan is the location of the main campus of Utah State University.

The town of Logan was founded in 1859 by settlers sent by Brigham Young to survey for the site of a fort near the banks of the Logan River. They named their new community "Logan" for Ephraim Logan, an early fur trapper in the area. Logan was incorporated on 17 January 1866. Brigham Young College was founded here in 1878 (but later closed), and Utah State University – then called the Agricultural College of Utah – was founded in 1888.

Logan's growth reflects settlement and post-war booms along with other changes incident to conditions in the West. Logan grew to about 20,000 in the mid-1960s, and according to Census estimates, exceeded 50,000 in 2015. 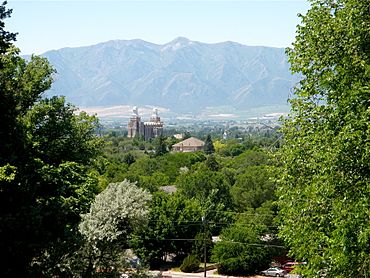 View over Logan and LDS Temple to the Wellsville Range

The city lies near the eastern edge of Cache Valley on the western slopes of the Bear River Mountains, the northernmost branch of the Wasatch Range. Mount Logan rises to an elevation of 9,710 feet (2,960 m) immediately to the east, and south of Logan Canyon. The eastern portions of the city are constructed on top of shelf-like "benches", late Pleistocene sedimentary deposits that were created by the glacially fed Logan River feeding into the northern stretches of Lake Bonneville, building a "Gilbert-type" river delta over several thousand years. The Logan River later cut down through these sedimentary deposits following the draining of Lake Bonneville approximately 14,500 years ago. This created a low-lying area with very steep slopes that reach into the rest of town and to the Logan River bottomlands. To the west of Logan lie flatlands that contain both farmland and marshes. To the north and south of Logan are rapidly growing residential suburbs.

Logan has a humid continental climate (Köppen Dfa/Dfb) with very warm though usually dry summers and cold winters with moderate snowfall. Precipitation tends to be heaviest in the spring months. Similar to other areas in northern Utah, during mid-winter high pressure systems often situate themselves over Cache Valley, leading to strong temperature inversions. These temperature inversions trap cold air and pollutants and allow thick smog to accumulate in the valley about three percent of the time. This can result in the worst air-pollution levels in the U.S., reducing air quality to unhealthy level.

Logan's city grid originates from its Main and Center Street block, with Main Street running north and south, and Center east and west. Each block north, east, south, or west of the origin accumulates in additions of 100 (e.g. 100 North, 100 East), though some streets have non-numeric names. This street grid is typical of many towns and cities that were founded by Latter-day Saints in the Mormon Corridor. Most of Logan's commercial businesses are located along Main Street, which spans the entire city.

Logan's downtown area is located in the center of the city and is noted for its many historic buildings and landmarks. Among them are the Logan Tabernacle and Logan Utah Temple, which was constructed on the highest hill in the valley so as to be seen for miles in all directions. Both buildings are owned and operated by the LDS Church. Along Center Street, which intersects Logan's Historic District, are a number of stately houses on the National Register of Historic Places. The downtown area also houses retail and cultural outlets, as well as the municipal and county buildings and courthouses.

The eastern portion of Logan includes the Cliffside and Island neighborhoods, as well as the University district. Utah State University (USU), with its many educational, cultural, agricultural, and athletic programs, was established in 1888. The campus stands on the eastern side of the city, near to the mountains. USU is the city's largest employer, and it has an enrollment of about 17,000 students in Logan. Logan Canyon begins in the foothills close to campus.

Logan's southern portion is a mixture of commercial and residential, and contains portions of the Logan River as well as the fairgrounds and aquatic center. The northern area of Logan serves partly as a retail district with numerous shops and restaurants, including the Cache Valley Mall. Logan has the region's largest and most comprehensive hospital, Logan Regional Hospital. The western portion of Logan is set aside as a center for light industry, especially along the area of 1000 West Street, and it also contains residential communities.

As of the 2000 Census there were 13,902 households counted in Logan, out of which 33.4% had children under the age of 18 living with them, 55.1% were married couples living together, 7.7% had a female householder with no husband present, and 34.0% were non-families. 17.9% of all households were made up of individuals and 5.7% had someone living alone who was 65 years of age or older. The average household size was 2.92 and the average family size was 3.20.

In the city, the population was spread out with

Logan is home to the Utah Festival Opera, which hosts a number of performances through the year. The Ellen Eccles Theatre shows concerts, community theater, ballet, and classic movies, and it also hosts national touring companies. Cache Valley Center for the Arts offers a variety of community arts classes and hosts numerous "Gallery Walk" events throughout the year in which participating businesses in historic downtown Logan feature different art, music, and food. The Summerfest Arts Faire, held annually at the Logan Tabernacle grounds on Father's Day Weekend, celebrates the arts through a fine art/fine craft festival with music, food and children's activities.

Logan Library, founded in 1916, makes more than 200,000 items available for residents to borrow and also hosts hundreds of events each year for all ages.

Logan hosts a vendor owned farmers' market every Saturday from May thru October. Named one of America's best farmers' markets in 2009, the "Cache Valley Gardeners' Market" was located at Merlin Olsen Park, and is now located in front of City Hall. Over twenty years old, the market is known as a gathering place for the sale of fresh, local produce, coffee, artisan breads, eggs, homecrafted gift items, art, children's activities and also for weekly concerts.

In 2009, Logan ranked No. 10 on Newsmax magazine's list of the "Top 25 Most Uniquely American Cities and Towns," a piece written by current CBS News travel editor Peter Greenberg. In determining his ranking, Greenberg cited the popular Utah Festival Opera.

The Willow Park Zoo is a small zoo in Logan's Willow Park, with a small collection of wild animals including monkeys, coyotes, bobcats, bald eagles, and land birds and ducks.

Logan is the home of two full-length golf courses, the Logan River Golf Course and the Logan Golf and Country Club. Other golf courses are also found around the Cache Valley Area.

There are numerous events at the Logan/Cache County Fairgrounds including fairs, rodeos, and demolition derbies. Nearby, the city of Logan runs an aquatic center and a skate park. During the winter season, the city operates an outdoor ice skating rink at Merlin Olsen Park (Central Park).

U.S. Highways US-89 and US-91 enter Logan from the southwest as a combined highway, and then separate in downtown Logan. US-91 goes north into Idaho, and US-89 goes east into Logan Canyon, and thence to Bear Lake. The Logan Utah-Idaho Metropolitan Statistical Area is one of the few metropolitan statistical areas in Utah not connected via an interstate highway (Interstate 15), and one of the few its size not connected to any interstate anywhere.

Logan is served by a local sales-tax-funded zero-fare bus system called the Cache Valley Transit District (CVTD), which incorporated the Logan Transit District (LTD) in 2007. The LTD system began in 1992 with six routes in Logan. Service outside of Logan began with the formation of CVTD in 2001. Currently, system consists of 16 routes that serve Logan and the adjacent cities of North Logan and River Heights. These include a northern route that reaches north to Richmond, and a southern route that serves the southern suburbs and Hyrum. There is also a five-time daily connection to Lewiston and Preston, Idaho. Despite a shorter distance to, and a larger resident population, there remains no connection with Brigham City within the CVTD; some have speculated that this is due to pressure from the For-Profit shuttle, Salt Lake Express, operating within Cache Valley.

There is a public general aviation airport at Logan, the Logan-Cache Airport (with IATA code LGU), but it has no scheduled airline services at this time. However, Logan is within ready driving distance or shuttle ride of Salt Lake City International Airport.

Logan hosts the annual "Cache Valley Cruise-In", Utah's largest automotive event, with a three-day exhibit of special cars and vehicles, concerts, and other activities. Events conclude with a car parade on Main Street.

Logan is also home to the annual "Small Satellite Conference", a week long conference attended by industry and academia from around the world, hosted by the American Institute of Aeronautics and Astronautics and Utah State University.

Each July Logan showcases local artwork, food, and performers at its annual Summerfest Arts Faire on the lawn of the historic Logan Tabernacle.

All content from Kiddle encyclopedia articles (including the article images and facts) can be freely used under Attribution-ShareAlike license, unless stated otherwise. Cite this article:
Logan, Utah Facts for Kids. Kiddle Encyclopedia.