The Bear River Range (also known as the Bear River Mountains), is a mountain range located in northeastern Utah and southeastern Idaho in the western United States. 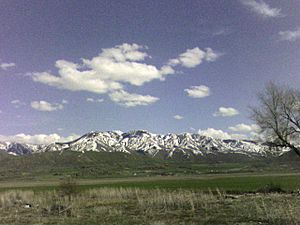 The range forms the eastern boundary of the Cache Valley. One of the mountains' sinks (Peter Sinks) recorded the lowest temperature in Utah on February 1, 1985, at −69 °F (−56 °C), which is also the second-lowest temperature ever recorded in the contiguous United States. U.S. Highway 89 via Logan Canyon provides the only major route through the mountains, and the canyon is the location of Logan River, the Beaver Mountain ski resort, and Tony Grove Lake.

All content from Kiddle encyclopedia articles (including the article images and facts) can be freely used under Attribution-ShareAlike license, unless stated otherwise. Cite this article:
Bear River Range Facts for Kids. Kiddle Encyclopedia.