Hyrum is a city in Cache County, Utah, United States. The population was 7,609 at the 2010 census, with an estimated population of 7,818 in 2014. It is included in the Logan, Utah–Idaho (partial) Metropolitan Statistical Area.

This climatic region is typified by large seasonal temperature differences, with warm to hot (and often humid) summers and cold (sometimes severely cold) winters. According to the Köppen Climate Classification system, Hyrum has a humid continental climate, abbreviated "Dfb" on climate maps.

Hyrum was founded in 1860 by a group of 23 families, mainly either Danish immigrants or sons of Ezra T. Benson. Benson organized an LDS ward there in May 1860. The town got a post office in 1861. By 1900 the population had grown to the point that the ward was divided in three. Hyrum had 1,869 inhabitants in 1930.

Hyrum is the home of Hyrum State Park, which is popular for fishing, water skiing, and camping.

Herds of elk spend the winter months at Hardware Ranch, which is reached by travelling east from Hyrum up Blacksmith Fork Canyon. The ranch is part of a wildlife management area, and sleigh rides are offered that take visitors into the herd.

There are 1,683 households out of which 59.7% have children under the age of 18 living with them, 76.8% are married couples living together, 9.2% have a female householder with no husband present, and 11.0% are non-families. 9.0% of all households are made up of individuals and 3.6% have someone living alone who is 65 years of age or older. The average household size is 3.75 and the average family size is 4.00.

Hyrum in the news

On December 12, 2006, U.S. Immigration and Customs Enforcement (I.C.E) staged a coordinated predawn raid at E.A. Miller, a meat packing plant in Hyrum, and at five other Swift & Company plants located in the western United States, interviewing workers and hauling off hundreds in buses. 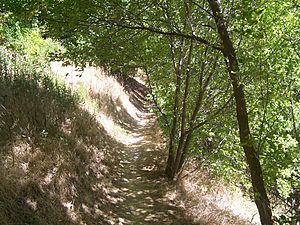 All content from Kiddle encyclopedia articles (including the article images and facts) can be freely used under Attribution-ShareAlike license, unless stated otherwise. Cite this article:
Hyrum, Utah Facts for Kids. Kiddle Encyclopedia.