Richmond is a city in Cache County, Utah, United States. The population was 2,470 at the 2010 census, with an estimated population of 2,535 in 2014. It is included in the Logan, Utah-Idaho Metropolitan Statistical Area.

Agrippa Cooper was the first settler in Richmond in the mid-1850s. Within a few years a scattering of log cabins, dugouts, and a log fort had been built. In 1860, a sawmill and a schoolhouse were erected. The city was likely named in honor of LDS apostle Charles C. Rich, though it may also have been named for the rich local soil or for Richmond, London, the hometown of some of its English settlers.

Richmond was incorporated in 1868.

Holstein cows were brought to Richmond in 1904, and thrived so well that the town was recognized as Utah's Holstein center. In 1912, the Richmond Holstein Cow Show was the first in the county. Now called Richmond's "Black & White Days", the show continues into its 98th year, and features carnival rides, food vendors, and a horse pull parade.

The town's first two creameries—Cache Valley Dairy and Union Creamery—each produced up to 40,000 pounds of milk per day in 1902. The creameries were absorbed by Utah Condensed Milk Company in 1904, and then reorganized as Sego Milk Products in 1920. For many years, the plant was the largest operation west of the Mississippi.

In 1971, Richmond resident Arthur Morin and 11 of his children drove 2,700 miles (4,300 km) in a camper to Lehigh Acres, Florida, to compete as finalists in the All American Family competition.

Part of the film Napoleon Dynamite was filmed in Richmond.

According to the United States Census Bureau, the city has a total area of 3.4 square miles (8.9 km2), all of it land.

Richmond is located in the Cache Valley.

This climatic region is typified by large seasonal temperature differences, with warm to hot (and often humid) summers and cold (sometimes severely cold) winters. According to the Köppen Climate Classification system, Richmond has a humid continental climate, abbreviated "Dfb" on climate maps.

There were 619 households out of which 49.9% had children under the age of 18 living with them, 73.5% were married couples living together, 8.1% had a female householder with no husband present, and 14.9% were non-families. 13.7% of all households were made up of individuals and 6.9% had someone living alone who was 65 years of age or older. The average household size was 3.31 and the average family size was 3.68. 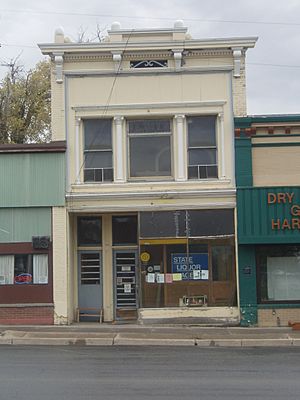 Mount Naomi Wilderness, within the Wasatch-Cache National Forest, is located east of Richmond.

All content from Kiddle encyclopedia articles (including the article images and facts) can be freely used under Attribution-ShareAlike license, unless stated otherwise. Cite this article:
Richmond, Utah Facts for Kids. Kiddle Encyclopedia.