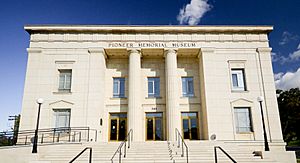 The Daughters of Utah Pioneers was organized 11 April 1901 in Salt Lake City. Annie Taylor Hyde, a daughter of John Taylor, president of The Church of Jesus Christ of Latter-day Saints, invited a group of fifty-four women to her home seeking to perpetuate the names and achievements of the men, women and children who were the pioneers in founding this commonwealth. The DUP (ISDUP) followed the lead of other national lineage societies, such as the Daughters of the American Revolution, in acting as a nonpolitical and nonsectarian organization. In 1925, the now International Society Daughters of Utah Pioneers (ISDUP) and its local units were legally incorporated.

In later decades, the ISDUP (DUP) has worked to conserve historical sites and landmarks, to collect artifacts, relics, manuscripts, photographs, and to educate its members and the general public. The society maintains satellite museums in the intermountain west, eighty-six of them in Utah, and manages an extensive collection in its Salt Lake City museum (Pioneer Memorial Museum). Numerous books have been published by the society, including community and family histories, cookbooks, history texts, children's stories, and a four-volume collection of biographical sketches "Pioneer Women of Faith and Fortitude" (1998).

ISDUP headquarters are located in the Pioneer Memorial Museum in Salt Lake City, Utah. The international organization is administered by a board. Membership is organized into "companies," whose presiding officers oversee the activities of "camps" of ten or more members in a geographic area. In 2006, the ISDUP consisted of 185 companies overseeing 1,050 camps in the United States and Canada with a total living membership of 21,451.

All content from Kiddle encyclopedia articles (including the article images and facts) can be freely used under Attribution-ShareAlike license, unless stated otherwise. Cite this article:
Daughters of Utah Pioneers Facts for Kids. Kiddle Encyclopedia.