The cast of Napoleon Dynamite. 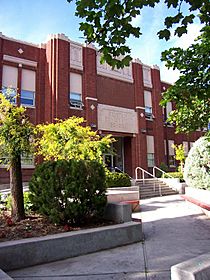 Preston High School was one of the filming locations for the movie. 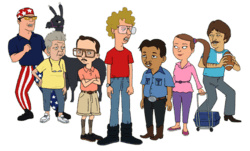 The characters of the animated series.

For the television series based on the film, see Napoleon Dynamite (TV series).

Napoleon is an unusual school teenager who lives in Preston, Idaho. He does not have a good home life. Napoleon lives with his older brother Kip and their grandmother. Napoleon’s grandmother goes to see some friends. Napoleon and Kip are left to stay with their uncle Rico. One day Napoleon meets Pedro. They become good friends. Pedro runs for school president. Pedro has to compete with the most popular girl in school, Summer Wheatly, to win the school vote. Napoleon meets a girl named Deb who he begins to like. Deb, Napoleon and Pedro keep working for Pedro to beat Summer Wheatly for president. Napoleon dances in a skit at the announcing of the president for Pedro. Kip gets married and Pedro becomes school president. Napoleon and Deb live a happy life together.

All content from Kiddle encyclopedia articles (including the article images and facts) can be freely used under Attribution-ShareAlike license, unless stated otherwise. Cite this article:
Napoleon Dynamite Facts for Kids. Kiddle Encyclopedia.