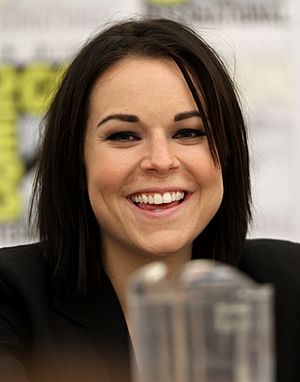 Albertina Marie "Tina" Majorino (February 7, 1985) is an American movie and television actress. She started acting as a child. She acted in the movies Waterworld and Napoleon Dynamite. On television, she acted in the series Big Love, Veronica Mars and True Blood. She was also in the animated television version of Napoleon Dynamite. She has a recurring role on the series Bones. In 2012, Majorino joined the cast of Grey's Anatomy. Her acting was begun around 1992. She was born in Westlake, California.

All content from Kiddle encyclopedia articles (including the article images and facts) can be freely used under Attribution-ShareAlike license, unless stated otherwise. Cite this article:
Tina Majorino Facts for Kids. Kiddle Encyclopedia.