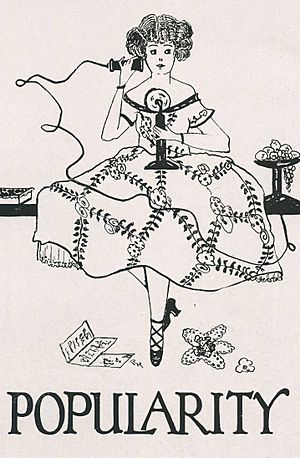 Popularity is the state of being well-liked or well-known. Popularity figures are an important part of many people's personal value systems, and forms a critical part of success in fields such as Management, politics, and the Entertainment Industry, among others.

Many different varieties of popularity exist, and many ways in which to gain it. General popularity usually involves respect in two ways: a popular person is respected by groups of people and will take that respect. This reinforces the idea that the person deserves the popularity. Likewise, amicability (friendliness) is an important part of popularity, as a person who does not like others is unlikely to be liked by others. This inverse nature of interpersonal popularity is often overlooked by people (particularly the young) who are attempting to become popular: being loud may be successful in gaining attention, but is unlikely to provide mutual respect.

All content from Kiddle encyclopedia articles (including the article images and facts) can be freely used under Attribution-ShareAlike license, unless stated otherwise. Cite this article:
Popularity Facts for Kids. Kiddle Encyclopedia.