Preston is a city in Franklin County, Idaho, United States. The population was 5,204 at the 2010 census. The city is the county seat of Franklin County. It is part of the Logan, Utah-Idaho Metropolitan Statistical Area. 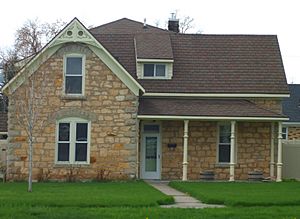 The Matthias Cowley House is one of four sites in Preston listed on the National Register of Historic Places.

In 1866, Latter-day Saint (LDS, or Mormon) pioneers arrived in the northern end of the Cache Valley, stretching across southeastern Idaho and northeastern Utah. They founded a community in that location and named it Worm Creek, but in 1881 changed it to Preston because leaders of the LDS Church in Salt Lake City objected to the name "Worm Creek" being part of any church congregation's name. The name Preston was suggested by a local member to honor William B. Preston, who at the time was president of the LDS Church's Cache Stake.

It was not until the 1880s while William C. Parkinson was serving as the bishop of the Preston LDS Ward that a regular townsite was laid out.

For several years the city held a "Napoleon Dynamite Festival" in the summer. Many of the featured festival themes related to events occurring during the film. For example: Tetherball Tournament, Tater Tot Eating Contest, Moon Boot Dance, Impersonation, Look-A-Like Contest, Football Throwing Contest and more. In 2004 there was a single day event that drew approximately 300 people. Although this was not a large crowd, it did help raise $1,500 for the Preston School District Education Foundation. In 2005 an estimated 6,000 people attended the event, but that number dropped to an estimated 400 people in 2006. The 2007 and 2008 event was held along with the 'That Famous Preston Night Rodeo' in Preston. There are no plans for reviving the event. 'That Famous Preston Night Rodeo' is usually held in late July, along with the Franklin County parade. The rodeo's name ('That Famous Preston Night Rodeo') comes from it being the first rodeo held during night time. It includes many events such as bull riding, barrel racing, and other popular events. The Franklin county parade includes floats and advertisements of local businesses. The rodeo and parade remain one of the town's most popular local events and traditions.

Each year Preston holds the "Idaho Festival of Lights", which starts the day after Thanksgiving and goes until December 31. The festival was started by two local business men (Wayne Bell and Walter Ross) along with many other community organizations to help celebrate Christmas within the community. The festival consists of a lighted parade, fireworks, and displays in the city park. The merchants along the main street of Preston have their store fronts decorated with Christmas lights during the festival.

A key event of the festival is the International Bed Race, which is held on the Saturday following Thanksgiving on the main street of Preston. Additional events are a kids' parade and free movie.

Nearby is the Cub River Canyon, which is a popular recreation area.

Within Preston itself, U.S. Highway 91 is the main north-south street, State Street. By taking US-91, it is possible to travel to Preston from Logan, Utah. Oneida Street, also State Highway 36 is the primary west-east road. Preston is a brief drive from Interstate 15.

There were 1,751 households of which 42.0% had children under the age of 18 living with them, 62.9% were married couples living together, 9.3% had a female householder with no husband present, 3.5% had a male householder with no wife present, and 24.2% were non-families. 21.3% of all households were made up of individuals and 10.8% had someone living alone who was 65 years of age or older. The average household size was 2.92 and the average family size was 3.43.

There were 1,529 households out of which 44.0% had children under the age of 18 living with them, 67.2% were married couples living together, 8.0% had a female householder with no husband present, and 21.5% were non-families. 20.0% of all households were made up of individuals and 11.4% had someone living alone who was 65 years of age or older. The average household size was 3.01 and the average family size was 3.50.

Much of the 2004 film Napoleon Dynamite was shot in the city of Preston, including at Preston High School, located several blocks from U.S. Highway 91. Several area landmarks can be seen throughout the film. Preston is the home of the film's creators, Jared and Jerusha Hess; Jared attended high school in Preston.

All content from Kiddle encyclopedia articles (including the article images and facts) can be freely used under Attribution-ShareAlike license, unless stated otherwise. Cite this article:
Preston, Idaho Facts for Kids. Kiddle Encyclopedia.