The La Sal Mountains or La Sal Range are a mountain range located in Grand and San Juan counties in the U.S. state of Utah, along the border with Colorado. The range rises above and southeast of Moab and north of the town of La Sal. This range is part of the Manti-La Sal National Forest and the southern Rocky Mountains. The maximum elevation is at Mount Peale, reaching 12,721 feet (3,877 m) above sea level.

The range contains three clusters of peaks separated by passes. The peaks span a distance of about 10 miles (16 km). The name of the range dates to Spanish times, when the Sierra La Sal (meaning the "Salt Mountains") were a prominent landmark on the Old Spanish Trail between Santa Fe and Los Angeles. 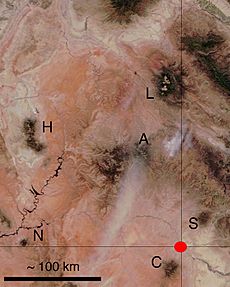 The range formed as a result of intrusion of igneous rocks and subsequent erosion of the surrounding less-resistant sedimentary rocks. The most abundant igneous rocks are porphyritic, with phenocrysts of hornblende and plagioclase: these rocks are called diorite in some accounts but trachyte in at least one other source. Syenite, some containing the unusual mineral nosean, makes up a few percent of the igneous rocks present. Some of the igneous intrusions have the shapes of laccoliths. Ages of these igneous rocks fall in the interval 25 to 28 million years. The magmas were emplaced into sedimentary rocks with ages from Permian to Cretaceous.

The La Sal Mountains rises high over the surrounding Colorado Plateau. Two other ranges on the Plateau, the Abajo Mountains and the Henry Mountains, formed around igneous intrusions of about the same age. Yet other nearby ranges, such as the Carrizo Mountains and Ute Mountain, formed about otherwise similar intrusions emplaced about 70 million years ago. Formation of these igneous rocks in two distinct time intervals has attracted the interest of scientists seeking explanations for magma production below relatively stable parts of the Earth's crust.

The La Sals at Sunset from Gemini Bridges Road

Peaks of the La Sal Mountains 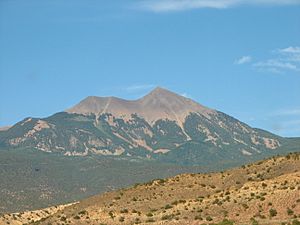 Little Tuk (left) and Mt. Tukuhnikivatz (right) of the La Sal Range in summer, seen from the south.

All content from Kiddle encyclopedia articles (including the article images and facts) can be freely used under Attribution-ShareAlike license, unless stated otherwise. Cite this article:
La Sal Mountains Facts for Kids. Kiddle Encyclopedia.