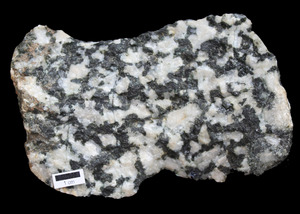 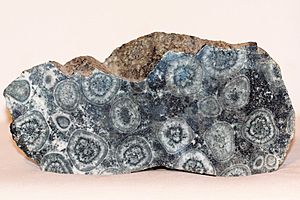 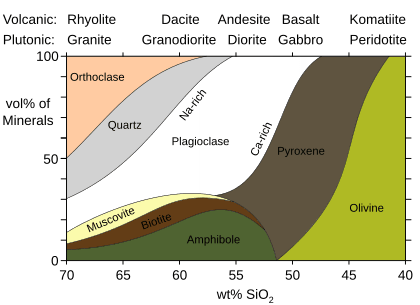 Diorite ( /ˈdaɪ.əˌraɪt/) is an intrusive igneous rock composed principally of the silicate minerals plagioclase feldspar (typically andesine), biotite, hornblende, and/or pyroxene. The chemical composition of diorite is intermediate, between that of mafic gabbro and felsic granite. Diorite is usually grey to dark-grey in color, but it can also be black or bluish-grey, and frequently has a greenish cast. It is distinguished from gabbro based on the composition of the plagioclase species; the plagioclase in diorite is richer in sodium and poorer in calcium. Diorite may contain small amounts of quartz, microcline, and olivine. Zircon, apatite, titanite, magnetite, ilmenite, and sulfides occur as accessory minerals. Minor amounts of muscovite may also be present. Varieties deficient in hornblende and other dark minerals are called leucodiorite. When olivine and more iron-rich augite are present, the rock grades into ferrodiorite, which is transitional to gabbro. The presence of significant quartz makes the rock type quartz-diorite (>5% quartz) or tonalite (>20% quartz), and if orthoclase (potassium feldspar) is present at greater than 10 percent, the rock type grades into monzodiorite or granodiorite. A dioritic rock containing feldspathoid mineral/s and no quartz is termed foid-bearing diorite or foid diorite according to content.

Diorite has a phaneritic, often speckled, texture of coarse grain size and is occasionally porphyritic.

Diorites may be associated with either granite or gabbro intrusions, into which they may subtly merge. Diorite results from the partial melting of a mafic rock above a subduction zone. It is commonly produced in volcanic arcs, and in cordilleran mountain building, such as in the Andes Mountains, as large batholiths. The extrusive volcanic equivalent rock type is andesite. 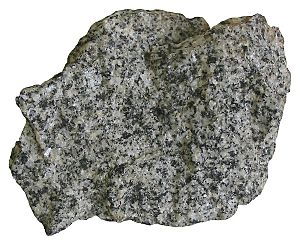 Diorite is a relatively rare rock; source localities include Leicestershire (one name for microdiorite—markfieldite—exists due to the rock's being found in the village of Markfield) and Aberdeenshire, UK; Guernsey; Sondrio, Italy; Thuringia and Saxony in Germany; Finland; Romania; Northeastern Turkey; central Sweden; the Darrans range of New Zealand; the Andes Mountains.

An orbicular variety found in Corsica is called corsite.

All content from Kiddle encyclopedia articles (including the article images and facts) can be freely used under Attribution-ShareAlike license, unless stated otherwise. Cite this article:
Diorite Facts for Kids. Kiddle Encyclopedia.