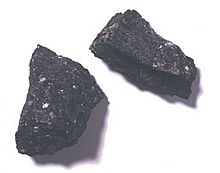 Hornblende is a complex series of silicate minerals.

Hornblende is not a recognized mineral in its own right, but the name is used as a general or field term, to refer to a dark amphibole.

Hornblende has a hardness of 5–6, a specific gravity of 2.9–3.4 and is typically an opaque green, greenish-brown, brown or black color. It is most often confused with the minerals augite and biotite mica, both of which are black and can be found in granite.

Hornblende is a common constituent of many igneous and metamorphic rocks such as granite, diorite, gabbro, basalt, andesite, gneiss, and schist. It is the principal mineral of amphibolites.

Very dark brown to black hornblendes that contain titanium may be called basaltic hornblende, from the fact that they are usually a constituent of basalt and related rocks.

The word hornblende is derived from the German horn and blenden, to 'blind' or 'dazzle'. The term blende is often used to refer to a brilliant non-metallic luster, for example, zincblende and pitchblende, the ore of uranium.

All content from Kiddle encyclopedia articles (including the article images and facts) can be freely used under Attribution-ShareAlike license, unless stated otherwise. Cite this article:
Hornblende Facts for Kids. Kiddle Encyclopedia.