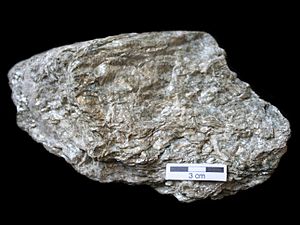 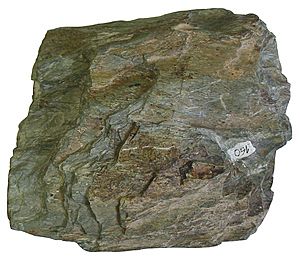 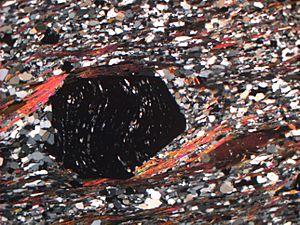 The schists are a group of metamorphic rocks which have lamellar (plate-like) minerals, such as micas, chlorite, talc, hornblende, graphite, and others. Quartz often occurs in drawn-out grains so that a form called quartz schist is produced. By definition, schist contains more than 50% platy and elongated minerals, often finely interleaved with quartz and feldspar. Schist often contains garnets.

The individual mineral grains in schist, drawn out into flaky scales by heat and pressure, can be seen by the naked eye. Schist is characteristically foliated, (~leaf-like) meaning the mineral grains split off easily into flakes or slabs. The word schist is derived from the Greek word σχίζειν schíxein meaning "to split". This refers to the ease with which schists can be split along the plane in which the platy minerals lie.

Schists are named after their mineral constituents, such as garnet schist, tourmaline schist, glaucophane schist, etc.

Schists are frequently used as dimension stone. Dimension stone is stone that has been selected and cut to specific shapes or sizes. 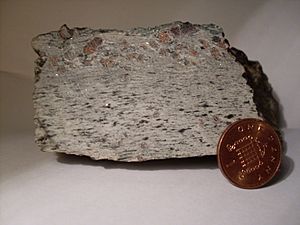 All content from Kiddle encyclopedia articles (including the article images and facts) can be freely used under Attribution-ShareAlike license, unless stated otherwise. Cite this article:
Schist Facts for Kids. Kiddle Encyclopedia.