The tree was named in 1867 after Ulysses S. Grant, Union Army general and the 18th President of the United States (1869–1877). President Calvin Coolidge proclaimed it the "Nation's Christmas Tree" on April 28, 1926. Due in large part to its huge base, the General Grant tree was thought to be the largest tree in the world prior to 1931, when the first precise measurements indicated that the General Sherman was slightly larger. On March 29, 1956, President Dwight D. Eisenhower declared the tree a "National Shrine", a memorial to those who died in war. It is the only living object to be so declared.

In September 2003, General Grant moved up one place in the giant sequoia size rankings when the Washington tree lost its crown and the hollow upper half of its trunk after a fire caused by a lightning strike. 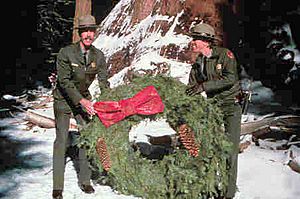 The tree is decorated as the "Nation's Christmas Tree"

All content from Kiddle encyclopedia articles (including the article images and facts) can be freely used under Attribution-ShareAlike license, unless stated otherwise. Cite this article:
General Grant (tree) Facts for Kids. Kiddle Encyclopedia.