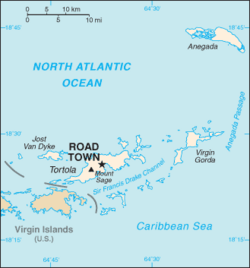 Map of the U.S. Virgin Islands.

Saint John is an island in the Caribbean Sea. It is a constituent district of the United States Virgin Islands (USVI). It is the smallest of the three main USVI islands.

All content from Kiddle encyclopedia articles (including the article images and facts) can be freely used under Attribution-ShareAlike license, unless stated otherwise. Cite this article:
Saint John, United States Virgin Islands Facts for Kids. Kiddle Encyclopedia.