The 150-square-kilometre (58-square-mile) British Virgin Islands consist of the main islands of Tortola, Virgin Gorda, Anegada, and Jost Van Dyke, along with over 50 other smaller islands and cays. About 15 of the islands are inhabited. The capital, Road Town, is situated on Tortola, the largest island, which is about 20 km (12 mi) long and 5 km (3 mi) wide. The islands had a population of about 28,000 at the 2010 Census, of whom approximately 23,500 lived on Tortola; the latest estimate (2016) is 30,800.

British Virgin Islanders are classed as British Overseas Territories citizens and since 2002 have had an entitlement to take up full UK citizenship. Although the territory is not part of the European Union and not directly subject to EU law, its citizens are deemed to be citizens of the EU as well.

In 1968 the British Government issued a memorandum requiring that the postage stamps in the territory should say "British Virgin Islands" (whereas previously they had simply stated "Virgin Islands"), a practice which is still followed today. This was likely to prevent confusion following on from the adoption of US currency in the Territory in 1959, and the references to US currency on the stamps of the Territory.

The Virgin Islands were first settled by the Arawak from South America around 100 BC (though there is some evidence of Amerindian presence on the islands as far back as 1500 BC). The Arawaks inhabited the islands until the 15th century when they were displaced by the more aggressive Caribs, a tribe from the Lesser Antilles islands, after whom the Caribbean Sea is named.

The first European sighting of the Virgin Islands was by Christopher Columbus in 1493 on his second voyage to the Americas. Columbus gave them the fanciful name Santa Ursula y las Once Mil Vírgenes (Saint Ursula and her 11,000 Virgins), shortened to Las Vírgenes (The Virgins), after the legend of Saint Ursula.

The Spanish Empire claimed the islands by discovery in the early 16th century, but never settled them, and subsequent years saw the English, Dutch, French, Spanish, and Danish all jostling for control of the region, which became a notorious haunt for pirates. There is no record of any native Amerindian population in the British Virgin Islands during this period, although the native population on nearby Saint Croix was decimated.

The Dutch established a permanent settlement on the island of Tortola by 1648. In 1672, the English captured Tortola from the Dutch, and the English annexation of Anegada and Virgin Gorda followed in 1680. Meanwhile, over the period 1672–1733, the Danish gained control of the nearby islands of Saint Thomas, Saint John and Saint Croix. 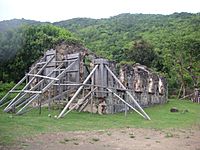 The ruins of St. Phillip's Church, Tortola, one of the most important historical ruins in the territory.

The British islands were considered principally a strategic possession, but were planted when economic conditions were particularly favourable. The British introduced sugar cane which was to become the main crop and source of foreign trade, and slaves were brought from Africa to work on the sugar cane plantations. The islands prospered economically until the middle of the nineteenth century, when a combination of the abolition of slavery in the territory, a series of disastrous hurricanes, and the growth in the sugar beet crop in Europe and the United States significantly reduced sugar cane production and led to a period of economic decline.

The British Virgin Islands were administered variously as part of the British Leeward Islands or with St. Kitts and Nevis, with an administrator representing the British Government on the islands. The islands gained separate colony status in 1960 and became autonomous in 1967. Since the 1960s, the islands have diversified away from their traditionally agriculture-based economy towards tourism and financial services, becoming one of the wealthiest areas in the Caribbean. 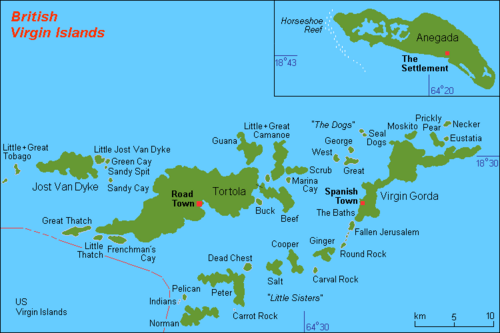 The British Virgin Islands comprise around 60 tropical Caribbean islands, ranging in size from the largest, Tortola 20 km (12 mi) long and 5 km (3 mi) wide, to tiny uninhabited islets, altogether about 150 square kilometres (58 square miles) in extent. They are located in the Virgin Islands archipelago, a few miles east of the US Virgin Islands. The North Atlantic Ocean lies to the north of the islands, and the Caribbean Sea lies to the south. Most of the islands are volcanic in origin and have a hilly, rugged terrain. Anegada is geologically distinct from the rest of the group and is a flat island composed of limestone and coral.

In addition to the four main islands of Tortola, Virgin Gorda, Anegada, and Jost Van Dyke, other islands include (see also Islands of the British Virgin Islands):

There are 113 kilometres (70 mi) of roads. The main airport, Terrance B. Lettsome International Airport, also known as Beef Island Airport, is located on Beef Island, which lies off the eastern tip of Tortola and is accessible by the Queen Elizabeth II Bridge. Cape Air, LIAT and Air Sunshine are amongst the airlines offering scheduled service. Virgin Gorda and Anegada have their own smaller airports. Private air charter services operated by Island Birds Air Charter fly directly to all three islands from any major airport in the Caribbean. Helicopters are used to get to islands with no runway facilities; Antilles Helicopter Services is the only helicopter service based in the country. The main harbour is in Road Town. There are also ferries that operate within the British Virgin Islands and to the neighbouring United States Virgin Islands. As in the UK and in the United States Virgin Islands, cars in the British Virgin Islands drive on the left, however they differ in that nearly all cars are left hand drive, being imported from the United States. The roads are often quite steep, narrow and winding, and ruts can be a problem when it rains.

Cyril E. King Airport in the US Virgin Islands has flights to a wider range of destinations, so is also used for travelling to the British Virgin Islands.

As of the 2010 Census, the population of the territory was 28,054 At the time of the 2003 census the population was around 21,730. The majority of the population (83%) are Afro-Caribbean, descended from slaves brought to the islands by the British. Other large ethnic groups include those of British and other European origin.

The 2010 Census reports the main places of origin of residents as follows:

About 4% of the population is of Hispanic origin, irrespective of race, primarily from Puerto Rico and the Dominican Republic. The territory has also been recently relieving immigrants from many islands in Lesser Antilles. The islands are heavily dependent upon migrant labour. In 2004, migrant workers accounted for 50% of the total population. 32% of workers employed in the British Virgin Islands work for the government.

Unusually, the territory has one of the highest drowning mortality rates in the world being higher than other high risk countries such as China and India. 20% of deaths in the British Virgin Islands during 2012 were recorded as drownings, all of them being tourists. Despite this, the territory's most popular beach still has no lifeguard presence.

Over 90% of the population who indicated a religious affiliation at the 2010 Census were Christian with the largest individual Christian denominations being Methodist (17.6%), Anglican (12%), Church of God (11%) and Roman Catholic (9%). The Constitution of the British Virgin Islands commences with a professed national belief in God. Hindus and Muslims constitute each approximately 1.2% of the population according to Word Religion Database 2005.

The primary language is English, although there is a local dialect. Spanish is spoken by Puerto Rican, Dominican and other Spanish-speaking immigrants.

The traditional music of the British Virgin Islands is called fungi after the local cornmeal dish with the same name, often made with okra. The special sound of fungi is due to a unique local fusion between African and European music. It functions as a medium of local history and folklore and is therefore a cherished cultural form of expression that is part of the curriculum in BVI schools. The fungi bands, also called "scratch bands", use instruments ranging from calabash, washboard, bongos and ukulele, to more traditional western instruments like keyboard, banjo, guitar, bass, triangle and saxophone. Apart from being a form of festive dance music, fungi often contains humorous social commentaries, as well as BVI oral history.

Among the noted names in Virgin Islands literature are Alphaeus Osario Norman (1885-1942), Verna Penn Moll, Jennie Wheatley, and Patricia G. Turnbull. Their poetry and that of 22 other writers, including the fastly emerging poet and literary critic Richard Georges, can be found in Where I See the Sun – Contemporary Poetry in The Virgin Islands (Tortola, Virgin Gorda, Anegada, Jost Van Dyke), an anthology edited by Lasana M. Sekou in 2016.

All content from Kiddle encyclopedia articles (including the article images and facts) can be freely used under Attribution-ShareAlike license, unless stated otherwise. Cite this article:
British Virgin Islands Facts for Kids. Kiddle Encyclopedia.