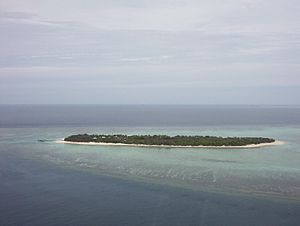 A cay (also spelled key; both pronounced alike as "key") is a small, low island consisting mostly of sand or coral and situated on top of a coral reef.

The English word cay comes from the Spanish word cayo and this from the Taíno word cayo meaning "small island". The English words key and quay (which means wharf) come from the old French kai meaning "sand bank". Because it is a Taíno word, "cay" (and the other forms) are used mainly in the Caribbean, but the type of island is found in the tropical seas where there are coral reefs.

Sand cays are built on the edge of the coral reefs, opposite the direction from which the wind blows most of the time. Because of that, cays are often elongated. Tides and wind (and sometimes sea birds) deposit coral debris. Weather affects the formation of cays greatly; large tides would bring much more debris onto the cay and thus make it larger, while a hurricane destroys a cay.

Some cays are very large; Cayo Coco, north of Cuba, is about 370 km2. Those large cays are being used for tourism because they have beaches with white sand and the presence of coral reefs. 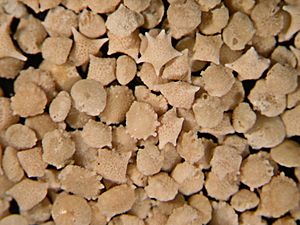 Cay sand under an optical microscope

A cay forms when ocean currents transport loose sediment across the surface of a reef to a depositional node, where the current slows or converges with another current, releasing its sediment load. Gradually, layers of deposited sediment build up on the reef surface. Such nodes occur in windward or leeward areas of reef where surfaces sometimes occur around an emergent outcrop of old reef or beach rock.

Cay sediments are largely composed of calcium carbonate (CaCO3), primarily of aragonite, calcite, and high magnesium calcite. They are produced by myriad plants (e.g., coralline algae, species of the green algae Halimeda) and animals (e.g., coral, molluscs, foraminifera). Small amounts of silicate sediment are also contributed by sponges and other creatures. Over time, soil and vegetation may develop on a cay surface, assisted by the deposition of sea bird guano.

A range of physical, biological and chemical influences determines the ongoing development or erosion of cay environments. These influences include: the extent of reef surface sand accumulations, changes in ocean waves, currents, tides, sea levels and weather conditions, the shape of the underlying reef, the types and abundance of carbonate producing biota and other organisms such as binders, bioeroders and bioturbators (creatures that bind, erode, and mix sediments) living in surrounding reef ecosystems.

Significant changes in cays and their surrounding ecosystems can result from natural phenomena such as severe El Niño Southern Oscillation (ENSO) cycles. Also, tropical cyclones can help build or destroy these islands.

There is much debate and concern over the future stability of cays in the face of growing human populations and pressures on reef ecosystems, and predicted climate changes and sea level rise. There is also debate around whether these islands are relict features that effectively stopped expanding two thousand years ago during the late Holocene or, as recent research suggests, they are still growing, with significant new additions of reef sediments.

Understanding the potential for change in the sediment sources and supply of cay beaches with environmental change is an important key to predicting their present and future stability. Despite, or perhaps because of all the debate around the future of cays, there is consensus that these island environments are very complex and somewhat fragile. 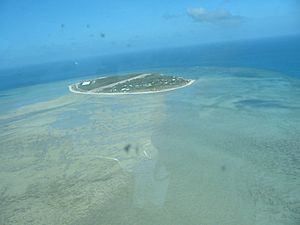 Examples of cays include:

All content from Kiddle encyclopedia articles (including the article images and facts) can be freely used under Attribution-ShareAlike license, unless stated otherwise. Cite this article:
Cay Facts for Kids. Kiddle Encyclopedia.