Islets are small islands. Examples are Ortac in the English Channel and the Senkaku Islands in the East China Sea. 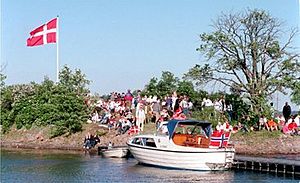 Danes on the islet Danmark in Norway. It is a typical Nordic skerry.

As suggested by its origin as islette, an Old French diminutive of "isle", use of the term implies small size, but little attention is given to drawing an upper limit on its applicability. 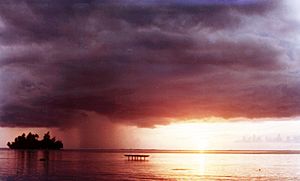 A Tahitian motu off the island of Raiatea at sunset

All content from Kiddle encyclopedia articles (including the article images and facts) can be freely used under Attribution-ShareAlike license, unless stated otherwise. Cite this article:
Islet Facts for Kids. Kiddle Encyclopedia.