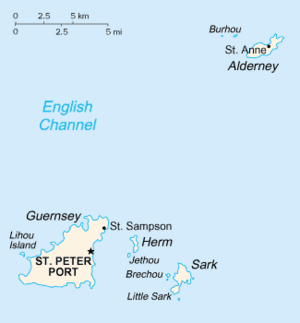 This is a map of the Bailiwick of Guernsey

-hou is a suffix (part added to the end of a word) found in many Channel Islands and Norman names. It is the Norman language version of the Old Norse holmr, meaning a small island, and often found anglicised elsewhere as "holm". It can still be found in modern Scandinavian languages, e.g. Stockholm.

The Norman hommet/houmet also comes from this suffix.

In Parisian French, the equivalent is îlot, which is the same as the English "islet". 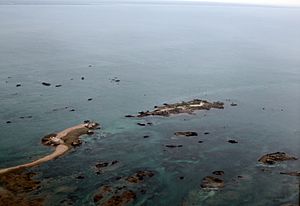 All content from Kiddle encyclopedia articles (including the article images and facts) can be freely used under Attribution-ShareAlike license, unless stated otherwise. Cite this article:
-hou Facts for Kids. Kiddle Encyclopedia.