Not to be confused with Lihou Reef National Nature Reserve 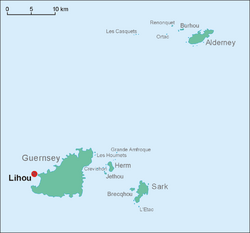 This is a map of the Bailiwick of Guernsey. Lihou is on the far left. 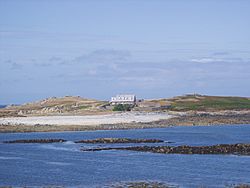 The island has the ruins of the priory of St. Mary which is believed to have been set up by Benedictine monks in the 12th century. The monks of the priory were not very popular with the local people, who thought they were devil worshippers. This animosity may be due to the monks' insistence on rights of wreck. Until 1415 it was under the control of Mont Saint Michel and then Eton College until the Reformation when it was closed and fell into disrepair.

The house on Lihou was used for target practice by heavy artillery during the German Occupation of the Channel Islands during World War II. It has now been rebuilt as accommodation for school groups, and is used as an educational resource.

Vraic (seaweed) was harvested and dried on frames set up on the beach. A 1927 factory building produced iodine from seaweed. All traces of the industry disappeared during the German Occupation.

The Lihou family name is included in parish records which go back as far as the early 15th century and there are a number of groups who study the ancestry of the Lihou's. More recently a group was set up using the social networking site 'Facebook' which links Lihou's around the world.

All content from Kiddle encyclopedia articles (including the article images and facts) can be freely used under Attribution-ShareAlike license, unless stated otherwise. Cite this article:
Lihou Facts for Kids. Kiddle Encyclopedia.