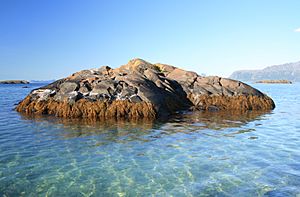 Skerries which are part of the Åland Islands, Finland

A skerry is a small rocky island, or islet, usually too small for human habitation. It may simply be a rocky reef. A skerry can also be called a low sea stack.

A skerry may have vegetative life such as moss and small, hardy grasses. They are often used as resting places by animals such as seals and birds.

The term skerry is derived from the Old Norse sker, which means a rock in the sea (which in turn derives from the Proto-Indo-European root *sker-, "cut", in the sense of a rock cut off from the land). The Old Norse term sker was brought into the English language via the Scots language word spelled skerrie or skerry. It is a cognate of the Scandinavian languages' words for skerry – Icelandic, Faroese: sker, Danish: skær, Swedish: skär, Norwegian: skjær / skjer, found also in German: Schäre, Finnish: kari, Estonian: skäär, Latvian: šēra, Lithuanian: Šcheras and Russian: шхеры (shkhery). In Scottish Gaelic, it appears as sgeir, e.g. Sula Sgeir, in Irish as sceir, in Welsh as sgeri, and in Manx as skeyr.

Skerries are most commonly formed at the outlet of fjords where submerged glacially formed valleys at right angles to the coast join with other cross valleys in a complex array. In some places near the seaward margins of fjorded areas, the ice-scoured channels are so numerous and varied in direction that the rocky coast is divided into thousands of island blocks, some large and mountainous while others are merely rocky points or rock reefs that menace navigation. 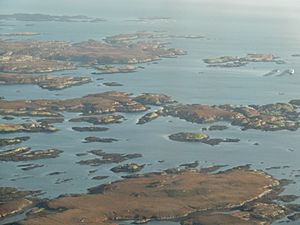 The island fringe of Norway is such a group of glacially formed skerries, called a skjærgård (which translates to archipelago); many of the cross fjords are so arranged that they parallel the coast and provide a protected channel behind an almost unbroken succession of rocky islands and skerries. By this channel one can travel through a protected passage almost the entire 1,600 km route from Stavanger to North Cape, Norway. The Blindleia is a skerry-protected waterway that starts near Kristiansand in southern Norway, and continues past Lillesand.

The Inside Passage provides a similar route from Seattle, Washington to Skagway, Alaska. Another such skerry-protected passage extends from the Straits of Magellan north for 800 km (500 mi) along the west coast of the South American continent.

The Swedish coast along Bohuslän is likewise guarded by skerries. Even the east coast of Sweden, in the Baltic Sea, has many big skärgårdar (archipelagos), notably Stockholm archipelago - Stockholms skärgård.

The southwestern coast of Finland also has a great many skerries; so many, in fact, that they form an archipelago. This area is experiencing post-glacial rebound that connects the rising islands as they break sea level, revealing till deposits and eventually clay bottoms. The skerries exist as small rocky islands before uplift of adjacent terrain changes the classification of this landform into a tombolo.

The United Kingdom has a large number of skerries including Staple Island (an Outer Farne Island) in England; a small rocky outcrop near the Fowlsheugh in northeast Scotland; numerous reefs in the Hebrides such as Dubh Artach and Skerryvore; and The Skerries, located off the Antrim coast of Northern Ireland.

Skerries is the name of a coastal area of Dublin, Ireland, with many skerries offshore, including Rockabill, Shenick Island, Colt Island and St Patrick's Island.

The most southerly skerries are perhaps the Skrap Skerries off South Georgia.

All content from Kiddle encyclopedia articles (including the article images and facts) can be freely used under Attribution-ShareAlike license, unless stated otherwise. Cite this article:
Skerry Facts for Kids. Kiddle Encyclopedia.