Skagway is derived from shԍagéi, a Tlingit idiom which figuratively refers to rough seas in the Taiya Inlet, that are caused by strong north winds. (See, “Etymology and the Mythical Stone Woman,” below.)

Etymology and the Mythical Stone Woman

Skagway was derived from shԍagéi, a Tlingit idiom which figuratively refers to rough seas in the Taiya Inlet, that are caused by strong north winds. Literally, shԍagéi means beautiful woman. The word is also a gerund (verbal noun), derived from the Tlingit verb theme -sha-ka-l-ԍéi, which means, in the case of a woman, to be beautiful.

The reason for its figurative meaning is that Shԍagéi or Skagway is the nickname of Kanagu, the mythical woman who transformed herself into stone at Skagway bay and who (according to legend) causes the strong, channeled winds which blow toward Haines, Alaska. The rough seas caused by these winds are therefore referred to by the use of Kanagu’s nickname, which is Shԍagéi or Skagway.

Except for the fact that “Kanagu … lives in [Skagway] bay,” the identity of the Kanagu stone formation is not recorded. However, it is likely to be Face Mountain, which is seen from Skagway bay. The Tlingit name for Face Mountain translates to Kanagu’s Image.

Prehistory to the 21st century 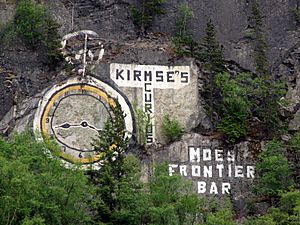 The area around present-day Skagway was inhabited by Tlingit people from prehistoric times. They fished and hunted in the waters and forests of the area and had become prosperous by trading with other groups of people on the coast and in the interior.

One prominent resident of early Skagway was William "Billy" Moore, a former steamboat captain. As a member of an 1887 boundary survey expedition, he had made the first recorded investigation of the pass over the Coast Mountains, which later became known as White Pass. He believed that gold lay in the Klondike because it had been found in similar mountain ranges in South America, Mexico, California, and British Columbia. In 1887, he and his son, J. Bernard "Ben" Moore, claimed a 160-acre (650,000 m2) homestead at the mouth of the Skagway River in Alaska. Moore settled in this area because he believed it provided the most direct route to the potential goldfields. They built a log cabin, a sawmill, and a wharf in anticipation of future gold prospectors passing through.

The boundary between Canada and the United States along the Alaska Panhandle was only vaguely defined then (see Alaska boundary dispute). There were overlapping land claims from the United States' purchase of Alaska from Russia in 1867 and British claims along the coast. Canada requested a survey after British Columbia united with it in 1871, but the idea was rejected by the United States as being too costly, given the area's remoteness, sparse settlement, and limited economic or strategic interest.

The Klondike gold rush changed everything. In 1896, gold was found in the Klondike region of Canada's Yukon Territory. On July 29, 1897, the steamer Queen docked at Moore's wharf with the first boat load of prospectors. More ships brought thousands of hopeful miners into the new town and prepared for the 500-mile journey to the gold fields in Canada. Moore was overrun by lot jumping prospectors and had his land stolen from him and sold to others.

The population of the general area increased enormously and reached 30,000, composed largely of American prospectors. Some realized how difficult the trek ahead would be en route to the gold fields, and chose to stay behind to supply goods and services to miners. Within weeks, stores, saloons, and offices lined the muddy streets of Skagway. The population was estimated at 8,000 residents during the spring of 1898 with approximately 1,000 prospective miners passing through town each week. By June 1898, with a population between 8,000 and 10,000, Skagway was the largest city in Alaska.

Due to the sudden influx of visitors to Skagway, some town residents began offering miners transportation services to aid them in their journeys to the Yukon, often at highly inflated rates. A group of miners upset with the treatment organized a town council to help protect their interests. But as the members of the council moved north to try their own hands at mining, control of the town reverted to the more unscrupulous, most notably Jefferson Randolph "Soapy" Smith.

1898, during the Klondike gold rush 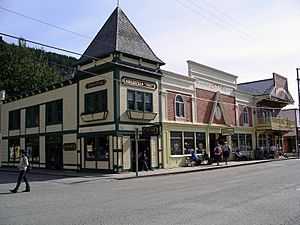 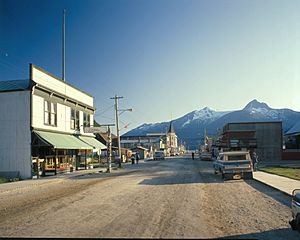 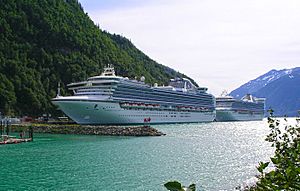 The prospectors' journey began for many when they climbed the mountains over the White Pass above Skagway and onward across the Canada–US border to Bennett Lake, or one of its neighboring lakes, where they built barges and floated down the Yukon River to the gold fields around Dawson City. Others disembarked at nearby Dyea, northwest of Skagway, and crossed northward on the Chilkoot Pass, an existing Tlingit trade route to reach the lakes. The Dyea route fell out of favor when larger ships began to arrive, as its harbor was too shallow for them except at high tide.

Officials in Canada began requiring that each prospector entering Canada on the north side of the White Pass bring with him one ton (909 kg) of supplies, to ensure that he did not starve during the winter. This placed a large burden on the prospectors and the pack animals climbing the steep pass.

In 1898, a 14-mile, steam-operated aerial tramway was constructed up the Skagway side of the White Pass, easing the burden of those prospectors who could afford the fee to use it. The Chilkoot Trail tramways also began to operate in the Chilkoot Pass above Dyea. In 1896, before the Klondike gold rush had begun, a group of investors saw an opportunity for a railroad over that route. It was not until May 1898 that the White Pass and Yukon Route began laying narrow gauge railroad tracks in Skagway. The railroad depot was constructed between September and December 1898. This destroyed the viability of Dyea, as Skagway had both the deep-water port and the railroad.

Construction of McCabe College, the first school in Alaska to offer a college preparatory high school curriculum, began in 1899. The school was completed in 1900.

By 1899, the stream of gold-seekers had diminished and Skagway's economy began to collapse. By 1900, when the railroad was completed, the gold rush was nearly over. In 1900, Skagway was incorporated as the first city in the Alaska Territory. Much of the history of Skagway was saved by early residents, such as Martin Itjen, who ran a tour bus around the historical town. He was responsible for saving and maintaining the gold rush cemetery from complete loss. He purchased Soapy Smith's saloon (Jeff Smith's Parlor), from going the way of the wrecking ball, and placed many early artifacts of the city's early history inside and opened Skagway's first museum.

In July 1923 President Warren G. Harding on his historic tour through Alaska visited Skagway. Harding was the first President of the United States to travel and tour Alaska while in office.

Skagway was one of the few towns in Alaska (along with Petersburg and Seward) to endorse the 1939 Slattery Report on Alaskan development through immigration, especially of Jews from Germany and Austria. 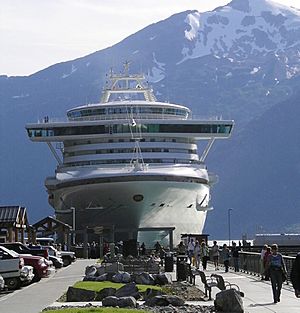 A cruise ship docked in Skagway

Skagway is located in a narrow glaciated valley at the head of the Taiya Inlet, the north end of the Lynn Canal, which is the most northern fjord on the Inside Passage on the south coast of Alaska. It is in the Alaska panhandle 90 miles northwest of Juneau, Alaska's capital city.

Skagway has a humid continental cool-summer climate (Köppen Dsb). It is in the rain shadow of the coastal mountains, though not as pronounced as the rain shadow in Southcentral Alaska, in the valley of the Susitna River, this still allows it to receive only half as much precipitation as Juneau and only a sixth as much as Yakutat. Although winters are too cold for the classification, precipitation patterns resemble a mediterranean climate due to the dry summers. The highest temperature recorded in Skagway is 92 °F or 33.3 °C in three separate years, most recently in 1975, and the lowest temperature recorded is −24 °F or −31.1 °C on February 2, 1947.

There were 401 households out of which 23.2% had children under the age of 18 living with them, 46.9% were married couples living together, 4.7% had a female householder with no husband present, and 46.4% were non-families. 36.2% of all households were made up of individuals and 6.7% had someone living alone who was 65 years of age or older. The average household size was 2.15 and the average family size was 2.81.

The port of Skagway provides sea access to cruise ships and ferries. 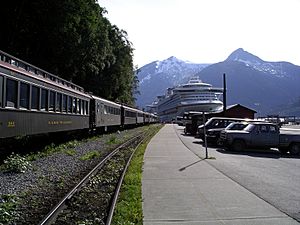 A tourist train arriving in Skagway at the cruise ship dock

Skagway is one of three Southeast Alaskan communities that is connected to the road system; Skagway's connection is via the Klondike Highway, completed in 1978. This allows access to the lower 48, Whitehorse, the Yukon, northern British Columbia, and the Alaska Highway. This also makes Skagway an important port-of-call for the Alaska Marine Highway — Alaska's ferry system — and serves as the northern terminus of the important and heavily used Lynn Canal corridor. (The other Southeast Alaskan communities with road access are Haines and Hyder.)

The White Pass and Yukon Route is a railway that formerly linked Whitehorse, Yukon in Canada to Skagway, the railway's southernmost terminus. Today, trains travel several times a week from May through September from Skagway to the small community of Carcross, approximately 45 miles south/southwest of Whitehorse. There, passengers (mostly tourists) can make connections via bus to Whitehorse.

See also: List of Airports in the Municipality of Skagway Borough

All content from Kiddle encyclopedia articles (including the article images and facts) can be freely used under Attribution-ShareAlike license, unless stated otherwise. Cite this article:
Skagway, Alaska Facts for Kids. Kiddle Encyclopedia.