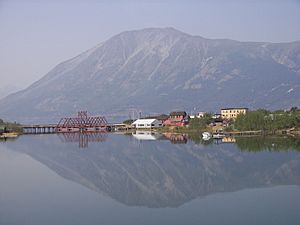 The White Pass and Yukon Route rail bridge over the strait between Bennett Lake and Nares Lake in Carcross, Yukon. Mount Gray is in the background.

Bennett Lake is a lake in the Province of British Columbia and Yukon Territory in northwestern Canada. It is just north of the border with the United States state of Alaska, near the Alaskan port of Skagway.

The narrow-gauge White Pass and Yukon Route Railroad connects the community of Bennett at the south end of the lake with Skagway further south and Whitehorse, Yukon on the north. It runs between Skagway and Fraser, British Columbia during the summer months.

The abandoned town of Bennett, British Columbia, historically usually referred to as Lake Bennett or Bennett Lake and the town of Carcross, Yukon are on the shores of Bennett Lake.

During the Klondike Gold Rush, Bennett Lake was where the gold-seekers who had crossed the Coast Mountains from Skagway or Dyea, carrying their goods over the Chilkoot Trail or the White Pass, purchased or built rafts to float down the Yukon River to the gold fields at Dawson City, Yukon, Canada. A large tent city sprang up on its shores, numbering in the thousands and offering all the services of a major city.

In late May 1898, the North-West Mounted Police counted 778 boats under construction at Lindeman Lake (located a difficult portage above Bennett Lake), 850 in Bennett and the surrounding area, and another 198 at Caribou Crossing (now Carcross) and Tagish Lake to help transport thousands of goldfield-bound travellers. It was further estimated that another 1,200 boats were built in these areas over the next few weeks.

Named in 1883 by Frederick Schwatka, US Army officer and explorer, after James Gordon Bennett Jr (1841–1918), editor of the New York Herald, who was sponsor of Schwatchka's search for the remains of the Franklin Expedition, 1878-81.

All content from Kiddle encyclopedia articles (including the article images and facts) can be freely used under Attribution-ShareAlike license, unless stated otherwise. Cite this article:
Bennett Lake Facts for Kids. Kiddle Encyclopedia.