The Giant Forest, famed for its giant sequoia trees, is within the United States' Sequoia National Park. This montane forest, situated at over 6,000 feet (1,800 m) above mean sea level in the western Sierra Nevada of California, covers an area of 1,880 acres (7.6 km2). The Giant Forest is the most accessible of all giant sequoia groves, as it has over 40 miles (64 km) of hiking trails.

Five of the ten most massive trees on the planet are located within the Giant Forest. The largest of these, the General Sherman tree, measures 36.5 feet (11.1 m) across the base. The giant sequoia tree is the most massive species of tree on earth, and one of just five tree species documented to grow to 300 feet (91 m) in height (the others are Coast Redwood, eucalyptus regnans, Douglas fir, and Sitka spruce). It is also among the longest-lived of all trees on the planet. 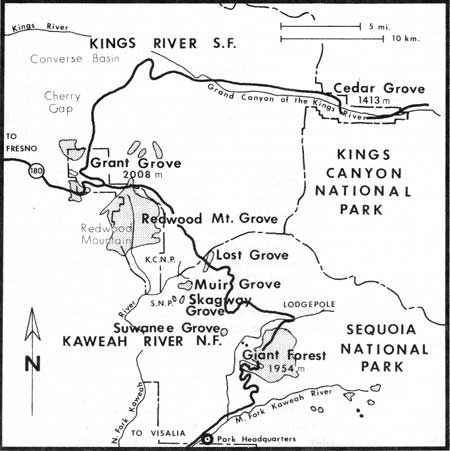 The western trailhead of the High Sierra Trail which crosses the Sierra Nevada to Mount Whitney is at the Crescent Meadow parking area.

Ponderosa, Jeffrey, Sugar, and Lodgepole pine trees are common here, as well as white and red fir. Visitors often see mule deer, Douglas squirrel, and American black bear. The National Park Service warns visitors not to leave any food in unattended vehicles because bears may break in to steal food.

The giant sequoia trees are first encountered on the approach from the south at Giant Forest Village—a small cluster of buildings that is dwarfed by the surrounding trees. Some of the sequoias have become unstable due to root damage caused by building development and hence visitor services in this area have been reduced, including transfer of lodging to Wuksachi Village, 7 miles (11 km) north. The sequoia forest extends mainly east of the village, and is accessed by a three-mile (4.8 km) side road plus many interconnecting foot trails. These range from one to five miles (1.6 to 8.0 km) in length, leading to various named individual trees and clusters of particular importance. The area is generally quite sheltered and receives high rainfall, which is one reason why the sequoia attain such size, but these conditions are also ideal for mosquitoes, which are abundant in the forests most of the year. These provide the only real hazard—the paths are generally quite level and well shaded from the sun.

Once the home of nearly 300 buildings, the region now has four, with no commercial activity. It is a designated "day use" area. The Giant Forest Lodge Historic District was designated in 1978, encompassing the main area of development in the Giant Forest grove. The development was demolished between 1995 and 2000, with day use features moving to the nearby Giant Forest Village–Camp Kaweah Historic District, which was itself extensively altered, and overnight visitor services moving to Wuksachi Village. The area within the grove was restored to nearly natural conditions, allowing the use of fire for forest management and the germination of new sequoia seedlings.

General Sherman, the most massive tree in the world

Some of the trees found in the grove that are worthy of special note are:

All content from Kiddle encyclopedia articles (including the article images and facts) can be freely used under Attribution-ShareAlike license, unless stated otherwise. Cite this article:
Giant Forest Facts for Kids. Kiddle Encyclopedia.