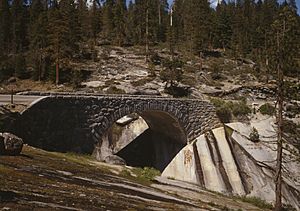 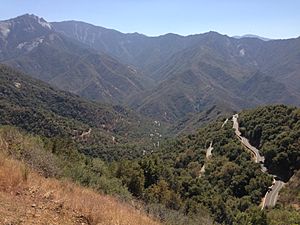 It is named after two of the largest and most famous Giant Sequoia trees, the General Sherman and General Grant trees. The highway is notoriously steep, narrow, winding, and difficult to drive, especially its southern section from Hospital Rock to Giant Forest within Sequoia National Park. This section also consists of numerous switchbacks, and has a speed limit of 10 MPH. Regulations restrict the length of vehicles—they must not exceed 40 feet (12 m), although vehicles longer than 22 feet (6.7 m) are not recommended to use the road between Potwisha Campground and Giant Forest Museum.

Two of the stone bridges on the highway are listed on the National Register of Historic Places.

The entire route is in Tulare County.

All content from Kiddle encyclopedia articles (including the article images and facts) can be freely used under Attribution-ShareAlike license, unless stated otherwise. Cite this article:
Generals Highway Facts for Kids. Kiddle Encyclopedia.