The Douglas squirrel (Tamiasciurus douglasii) is a pine squirrel found in the Pacific Northwest of North America, including the coastal states of the United States as well as the southwestern coast of British Columbia in Canada. It is sometimes known as the chickaree or pine squirrel, although these names are also used for the American red squirrel. Variant spellings of the common name are Douglas' squirrel and Douglas's squirrel. The Native Americans of Kings River called it the "Pillillooeet", in imitation of its characteristic alarm call. 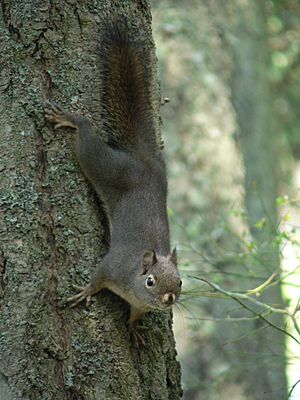 John Muir described the Douglas squirrel, Tamiasciurus douglasii, as "by far the most interesting and influential of the California Sciuridæ". Adults are about 33 cm in length (including its tail, which is about 13 cm long), and weigh between 150 and 300 grams. Their appearance varies according to the season. In the summer, they are a greyish or almost greenish brown on their backs, and pale orange on the chest and belly, while legs and feet appear brown. In the winter, the coat is browner and the underside is grayer; also, the ears appear even tuftier than they do in summer. Like many squirrels, Douglas squirrels have a white eye ring.

Mating can occur as early as February. Gestation is about four weeks, and the young (which are altricial) are weaned at about eight weeks of age. There may be up to six kits in a litter, though four is more usual. In the southern and lower parts of their range they produce two litters each year.

Douglas squirrels live in coniferous forest habitats along the Pacific Coast, from the Sierra Nevada (mountains) of California, northwards to the southwestern coast of British Columbia. Tamiasciurus douglasii prefer old-growth forests or mature second-growth forests, and some authors regard them as dependent on its presence. They essentially replace the American Red Squirrel, which inhabits the coniferous forests of the rest of North America, in these areas. The two species have very minimal overlap in territory.

They are territorial; in winter, each squirrel occupies a territory of about 10 000 square metres, but during the breeding season a mated pair will defend a single territory together. Douglas squirrels are active by day, throughout the year, often chattering noisily at intruders. In summer nights, they sleep in ball-shaped nests that they make in the trees, but in the winter they use holes in trees as nests. Groups of squirrels seen together during the summer are likely to be juveniles from a single litter. 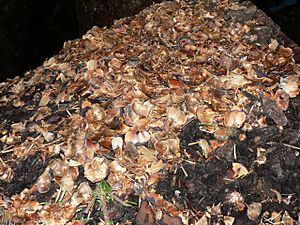 Douglas squirrels mostly eat seeds of coniferous trees such as Douglas fir (Pseudotsuga menziesii), Sitka spruce (Picea sitchensis) and shore pine (Pinus contorta). They also eat acorns, berries, mushrooms, the eggs of birds such as yellow warblers, and some fruit including strawberries and plums. Douglas squirrels are larder hoarders, storing their food in a single location or 'larder' called a midden. As the squirrel peels the scales off cones to get at the seeds, the discarded scales accumulate into piles that can grow to several meters across as the same site is used by generations of squirrels.

Their predators include American martens, bobcats, domestic cats, northern goshawks, and owls; although they quickly acclimatise to human presence, humans can be a threat to them, through robbing of their cone caches to find seeds for tree cultivation and through the destruction of old growth forest. However, the squirrels' numbers appear to be unaffected by commercial thinning of forests.

Interesing facts about the Douglas squirrel

All content from Kiddle encyclopedia articles (including the article images and facts) can be freely used under Attribution-ShareAlike license, unless stated otherwise. Cite this article:
Douglas squirrel Facts for Kids. Kiddle Encyclopedia.