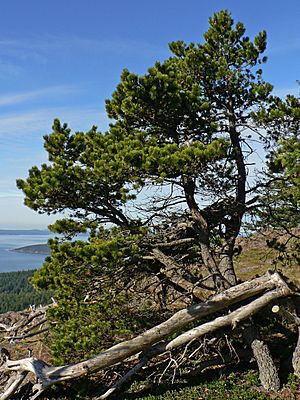 ACFL originated in the August 2, 1919, purchase by the city of Washington Power, Light and Water Company equipment and lands for $135,000. Prior to 1989, the forest was logged for the revenue that it produced. In the late 1980s, the forest produced little or no net income and a community organization, Friends of the Forest, was formed to oppose logging. Subsequently, a survey by the Parks Department indicated that the community favored non-forestry uses of those lands, and a study showed that the forest trails were highly valued for recreational use. In 1990, the Forest Endowment Fund was started. On April 15, 1991, the City Council ended logging, except to remove downed or dangerous trees, from the permitted uses of the forest. In 1998, a Conservation Easement Program (CEP) was adopted by the city council as a means of funding ACFL and preserving the forest. Contributions to the CEP preserve the forest at a rate of $1000 per acre. The conservation easements are held and monitored by Skagit Land Trust. As of mid-2007, over $1.5 million had been contributed and 1,500 acres (6.1 km2) was preserved.

All content from Kiddle encyclopedia articles (including the article images and facts) can be freely used under Attribution-ShareAlike license, unless stated otherwise. Cite this article:
Anacortes Community Forest Lands Facts for Kids. Kiddle Encyclopedia.