Arbutus menziesii, the Pacific madrone or madrona, is a species of tree in the family Ericaceae, native to the western coastal areas of North America, from British Columbia to California.

It is also known as the madrona, madrone, madroño, madroña, or bearberry. The name "strawberry tree" (A. unedo) may also be found in relation to A. menziesii (though it has no relation to the strawberry fruit). According to the Sunset Western Garden Book, in the United States, the name "madrone" is more common south of the Siskiyou Mountains of southern Oregon and Northern California and the name "madrona" is more common north of the Siskiyous. The Concow tribe calls the tree dis-tā'-tsi (Konkow language) or kou-wät′-chu. In British Columbia it is simply referred to as arbutus. Its species name was given it in honor of the Scottish naturalist Archibald Menzies, who noted it during George Vancouver's voyage of exploration.

Arbutus menziesii is an evergreen tree with rich orange-red bark that when mature naturally peels away in thin sheets, leaving a greenish, silvery appearance that has a satin sheen and smoothness. In spring, it bears sprays of small bell-like flowers, and in autumn, red berries. The berries dry up and have hooked barbs that latch onto larger animals for migration. It is common to see madronas of about 10 to 25 metres (33 to 82 ft) in height, but with the right conditions trees may reach up to 30 metres (98 ft). In ideal conditions, madronas can also reach a thickness of 5 to 8 feet (1.5 to 2.4 m) at the trunk, much like an oak tree. Leaves are thick with a waxy texture, oval, 7 to 15 centimetres (2.8 to 5.9 in) long and 4 to 8 centimetres (1.6 to 3.1 in) broad, arranged spirally; they are glossy dark green above and a lighter, more grayish green beneath, with an entire margin. The leaves are evergreen, lasting a few years before detaching, but in the north of its range, wet winters often promote a brown to black leaf discoloration due to fungal infections. The stain lasts until the leaves naturally detach at the end of their lifespan.

Madrones are native to the western coast of North America, from British Columbia (chiefly Vancouver Island and the Gulf Islands) to California. They are mainly found in Puget Sound, the Oregon Coast Range, and California Coast Ranges, but are also scattered on the west slope of the Sierra Nevada and Cascade mountain ranges. They are rare south of Santa Barbara County, with isolated stands south to Palomar Mountain in California. One author lists their southern range as extending as far as Baja California in Mexico, but others point out that there are no recorded specimens collected that far south, and the trees are absent from modern surveys of native trees there. However, other Arbutus species are endemic to the area. 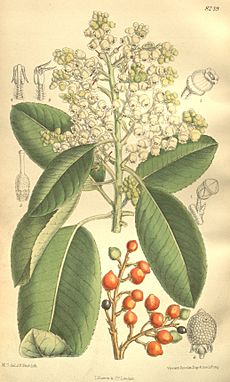 The trees are difficult to transplant and a seedling should be set in its permanent spot while still small. Transplant mortality becomes significant once a madrone is more than 1 foot (30 cm) tall. The site should be sunny (south- or west-facing slopes are best), well drained, and lime-free (although occasionally a seedling will establish itself on a shell midden). In its native range, a tree needs no extra water or food once it has become established. Water and nitrogen fertilizer will boost its growth, but at the cost of making it more susceptible to disease.

Native Americans ate the berries raw and cooked, but because the berries have a high tannin content and are thus astringent, they more often chewed them or made them into a cider. Overeating causes cramps. The Native Americans also used the berries to make necklaces and other decorations, and as bait for fishing. Bark and leaves were used to treat stomach aches, cramps, skin ailments, and sore throats. The bark was often made into a tea to be drunk for these medicinal purposes. Many mammal and bird species feed off the berries, including American robins, cedar waxwings, band-tailed pigeons, varied thrushes, quail, mule deer, raccoons, ring-tailed cats, and bears. Mule deer will also eat the young shoots when the trees are regenerating after fire. The flowers also produce nectar which can be made into honey.

It is also important as a nest site for many birds, and in mixed woodland it seems to be chosen for nestbuilding disproportionately to its numbers. The wood is durable and has a warm color after finishing, so it has become more popular as a flooring material, especially in the Pacific Northwest. An attractive veneer can also be made from the wood. However, because large pieces of madrona lumber warp severely and unpredictably during the drying process, they are not used much. Madrone is burned for firewood, though, since it is a very hard and dense wood that burns long and hot, surpassing even oak in this regard.

Although drought tolerant and relatively fast growing, Arbutus menziesii is currently declining throughout most of its range. One likely cause is fire control; under natural conditions, the madrona depends on intermittent naturally occurring fires to reduce the conifer overstory. Mature trees survive fire, and can regenerate more rapidly after fire than the Douglas firs with which they are often associated. They also produce very large numbers of seeds, which sprout following fire.

Increasing development pressures in its native habitat have also contributed to a decline in the number of mature specimens. This tree is extremely sensitive to alteration of the grade or drainage near the root crown. Until about 1970, this phenomenon was not widely recognized on the west coast; thereafter, many local governments have addressed this issue by stringent restrictions on grading and drainage alterations when Arbutus menziesii trees are present. The species is also affected to a small extent by sudden oak death, a disease caused by the water-mold Phytophthora ramorum.

During the Soberanes Fire in the summer of 2016, the largest known specimen of madrone was burned and possibly killed. The tree, 125 feet (38 m) tall and more than 25 feet (7.6 m) in circumference, was listed on the American Forests National Big Tree list, a register of the biggest trees by species in the United States. The tree was located within the Joshua Creek Canyon Ecological Reserve on the Big Sur Coast of California. The fire was caused by an illegal campfire.

All content from Kiddle encyclopedia articles (including the article images and facts) can be freely used under Attribution-ShareAlike license, unless stated otherwise. Cite this article:
Pacific madrone Facts for Kids. Kiddle Encyclopedia.