It ranges from British Columbia, Washington, Oregon, California, and southern Arizona south in higher elevations through Mexico and Central America to northern Argentina. In autumn it migrates out of its permanent resident range into northern California, New Mexico, and parts of Utah and Colorado. It is found from almost sea level to 3,600 m (12,000 ft), generally in oak, pine-oak, and coniferous forests. It feeds on seeds, notably acorns, as well as berries and small fruits. 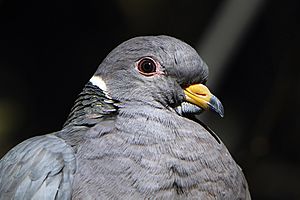 The plumage is gray, somewhat darker above. The head and underparts have a faint pink cast, especially in the adult male; the belly is nearly white. The distal half of the tail is also pale (except in the subspecies of Baja California), whence the English name. The bill and feet are yellow, good identification marks at sufficiently close range. Adults have green iridescence on the back of the neck, adjacent to a thin white collar on the nape. Juvenile birds have white feather edges above, giving a scaly appearance. 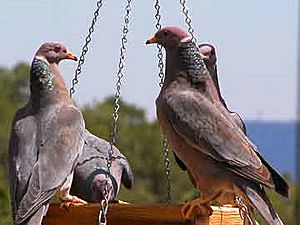 At a feeder near Pecos, New Mexico

This species is relatively quiet for a pigeon. Its voice is low-pitched and owl-like, often in two-syllable calls that rise and then fall (huu-ooh) with even spacing between calls. It also makes a variety of harsh squawking sounds for a variety of reasons.

It builds a rudimentary platform nest out of twigs, in which it lays one or two eggs. Outside the breeding season it forms flocks, sometimes over 50 birds, and often becomes nomadic, following the acorn crop or moving to lower altitudes or other areas outside its breeding range. They commonly congregate at and drink from mineral springs, although it is not fully understood why. In addition to acorns and other seeds, the band-tailed pigeon will seasonally consume fruits such as Pacific madrona and Toyon berries. This species often visits bird feeders. With the introduction of English Holly and English Ivy, two popular plants in landscaping in western North America, the bird is found in persistent numbers in suburban areas now as well.

All content from Kiddle encyclopedia articles (including the article images and facts) can be freely used under Attribution-ShareAlike license, unless stated otherwise. Cite this article:
Band-tailed pigeon Facts for Kids. Kiddle Encyclopedia.