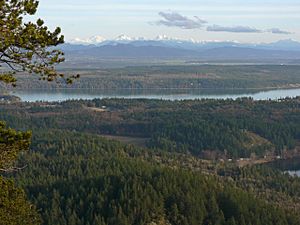 Mount Erie is a mountain on Fidalgo Island in Skagit County, Washington, United States. It is on public park land owned and managed by the city of Anacortes and is located in the south of the Anacortes Community Forest Lands.

Mount Erie was named in 1841 by the Wilkes Expedition for the Battle of Lake Erie. The mountain itself was first explored in the 1960s by local climbers, including Dallas Kloke. It is known for its climbing as well as the view from the summit. The summit is accessible via a single-lane, paved road from the base. At 1,273 feet (388 m) tall, Mount Erie is the highest point on Fidalgo Island. On a clear day, Mount Baker, about 43 miles (69 km) to the northeast, and Mount Rainier, about 117 miles (188 km) to the southeast, can be seen from the summit.

Located near the Fidalgo Complex in the San Juan Islands of Washington Mt. Erie has a unique and somewhat puzzling composition. Mt. Erie is thought to have been formed during the Jurassic period (155-170 Ma.) by invasive volcanic flows creating batholithic masses of diorite, which also helped to create the island arcs associated with the San Juan Islands. By the end of the late Jurassic period the area experienced uplift and erosion and was subjected to intense folding and faulting. At this point most of the deposited Paleozoic and Mesozoic sediments had been eroded away exposing the plutons of diorite, which is the primary igneous rock found on Mt Erie.

At some point the diorite pluton experienced intrusion by gabbro dikes associated with the formation of oceanic seafloor, indicating that the area may have experienced periods of submersion as the Juan de Fuca plate subducted underneath the North American plate accreted the area. This whole process of constant uplift and erosion followed by accretion is thought to have created the unique ophiolites associated with the San Juan Islands and primarily the Fidalgo Complex located near the mountain.

During the Quaternary Period the area experienced many glacial periods and retreats and such evidence for the glacial erosion of Mt. Erie itself can be observed at the summit of the mountain as large striations in the diorite and gabbro. These periods of glacial erosion were separated by warming trends and continue to present day.

All content from Kiddle encyclopedia articles (including the article images and facts) can be freely used under Attribution-ShareAlike license, unless stated otherwise. Cite this article:
Mount Erie (Washington) Facts for Kids. Kiddle Encyclopedia.