Fort Eustis is a United States Army installation located near Newport News, Virginia. In 2010, it was combined with nearby Langley Air Force Base to form Joint Base Langley–Eustis.

The post is the home to the United States Army Training and Doctrine Command, and also home to the U.S. Army Aviation Logistics School.

Fort Eustis is the home of the Army Aviation Logistics School and 7th Transportation Brigade. Other significant tenants include the Army Training Support Center (ATSC) and the Army Aviation Applied Technology Directorate (AATD). At Fort Eustis and Fort Story, officers and enlisted soldiers receive education and on-the-job training in all modes of transportation, aviation maintenance, logistics and deployment doctrine and research.

The headquarters of the Army Transportation Corps was located at Fort Eustis until 2010 when it moved to Fort Lee.

Much of the low-lying land along the James River which now constitutes Fort Eustis was known in colonial times as Mulberry Island, and was first settled by the English colonists shortly after Jamestown was established in 1607. An important event in Virginia's history occurred in the James River off Mulberry Island in the summer of 1610. Survivors of the ill-fated Third Supply mission from England and the Starving Time in the Colony had boarded ships intent upon abandoning the floundering Colony of Virginia and were met off Mulberry Point by Lord Delaware with a fleet of ships headed upriver bringing supplies from England and a fresh determination to stay. He literally turned the situation around by convincing the colonists, who had just abandoned Jamestown, to turn their ships around and go back to colonizing in the area, rather than return to England.

Among those who almost left was John Rolfe, who had departed England with his wife, Pocohontas, and child in 1609, with some very promising seeds for a different strain of tobacco he hoped would prove more favorable to export from Virginia than had been the experience to date. He had been shipwrecked on Bermuda in the Sea Venture lost his wife and child by this time, but still had the untried seeds. The turning point at Mulberry Island delivered both Lord Delaware and businessman-farmer John Rolfe, two very different men, back to Jamestown, where they and the others were to find new success.

Lord Delaware's skills and resources combined with Rolfe's new strain of tobacco to provide the colony with effective leadership structure as the new cash crop began financial stabilization by 1612. By 1614, Rolfe owned an interest in a tobacco plantation. That same year, he became the husband of Pocahontas. For the next 300 years, Mulberry Island remained very rural, until it was purchased by the Federal Government in 1918.

During the Peninsula Campaign of the American Civil War in 1862, Fort Crafford on Mulberry Island anchored the southern end of the Warwick Line, a line of Confederate defensive works across the Virginia Peninsula extending to Yorktown on the north at the York River.

On 7 March 1918, the Army bought Mulberry Island and the surrounding land for $538,000 as part of the military build-up for World War I. Approximately 200 residents were relocated, many to the Jefferson Park area nearby in Warwick County. Camp Abraham Eustis was established as a coast artillery replacement center for Fort Monroe and a balloon observation school. It was named for Brevit Brigadier General Abraham Eustis, a 19th-century U.S. military leader who had been the first commanding officer of Fort Monroe, a defensive fortification at the mouth of Hampton Roads about 15 miles (24 km) east at Old Point Comfort in what is now the city of Hampton.

A few miles upstream along the James River, a satellite facility, Camp Wallace, was established in 1918 as the Upper Firing Range of for artillery training. Consisting of 30 barracks, six storehouses, and eight mess halls, it was located on 160 acres (0.6 km2) on the edge of Grove, just west of the Carter's Grove Plantation property, south of U.S. Route 60, and east of the old Kingsmill Plantation in nearby James City County.

Camp Wallace included some rugged terrain and bluffs overlooking the river. It was the site of anti-aircraft training during World War II. Many years later, the Army's aerial tramway was first erected at Camp Wallace and later moved to Fort Eustis near the Reserve Fleet for further testing. The purpose of the tramway was to provide cargo movement from ship-to-shore, shore-to-ship, and overland. The tramway supplemented beach and pier operations, used unloading points deemed unusable due to inadequate or non-navigable waters, or to traverse land that was otherwise impassable.

In 1971, the U.S. Army agreed to a land swap with Anheuser-Busch in return for a larger parcel which is located directly across Skiffe's Creek from Fort Eustis. Along with land previously owned by Colonial Williamsburg, the former Camp Wallace land became part of a massive development. Nearby, the Busch Gardens Williamsburg theme park opened in 1975, as well as a large brewery, and the Kingsmill Resort.

Camp Abraham Eustis became Fort Eustis and a permanent military installation in 1923. In 1925 Eustis National Forest was established on the installation. The post was garrisoned by artillery and infantry units until 1931, when it became a federal prison, primarily for bootleggers during Prohibition. The repeal of Prohibition resulted in a prisoner decline and the post was taken over by various other military and non-military activities including a WPA camp that utilized some of the barracks on the post during the Great Depression.

Fort Eustis was reopened as a military installation in August 1940 as the Coast Artillery Replacement Training Center. In 1943, the Caribbean Regiment of the British Army was formed there. In 1946, Fort Eustis became home to the newly formed Transportation School which moved from New Orleans. Training in rail, marine, amphibious operations and other modes of transportation was consolidated at Fort Eustis.

The Base Realignment and Closure directives from the U.S. Congress, resulted in the U.S. Army Transportation School and Center moving to Fort Lee, Va., in 2010. Fort Eustis was merged with nearby Langley Air Force Base as Joint Base Langley-Eustis and its former sub-installation Fort Story was re-aligned as a Naval installation. Joint Base Langley Eustis gained the U.S. Army Training and Doctrine Command after the closure of Fort Monroe. 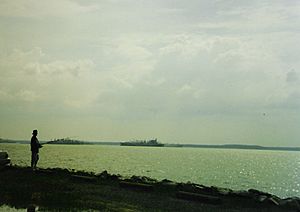 The Ghost fleet (sometimes known as the Dead Fleet) anchored in the James River near Fort Eustis.

A portion of the U.S. Maritime Administration's National Defense Reserve Fleet (NDRF) is anchored in the James River adjacent to Mulberry Island. Known locally as the Ghost Fleet, some of these inactive ships have become too old and deteriorated to ever be reactivated and have become environmental hazards, as they still hold fuel oil and other hazardous substances. Since the start of the 21st century many of these ships, some dating back to the World War II era have been removed under contracts with scrapping companies. 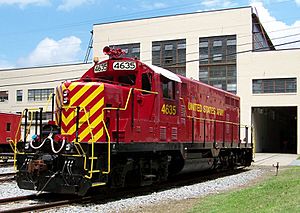 The U.S. Army Transportation Museum, a museum of U.S. Army vehicles and other transportation related equipment, and memorabilia, is located on the grounds of Fort Eustis.

The following units are stationed at Fort Eustis:

All content from Kiddle encyclopedia articles (including the article images and facts) can be freely used under Attribution-ShareAlike license, unless stated otherwise. Cite this article:
Fort Eustis Facts for Kids. Kiddle Encyclopedia.