Paris is a home rule-class city in Bourbon County, Kentucky, in the United States. It lies 18 miles (29 km) northeast of Lexington on the Stoner Fork of the Licking River. It is the seat of its county and forms part of the Lexington–Fayette Metropolitan Statistical Area. As of the 2010 census it had a population of 8,553. 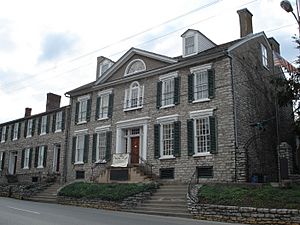 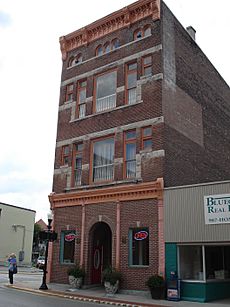 Joseph Houston settled a station in the area in 1776, but was forced to relocate due to prior land grants. In 1786, Lawrence Protzman purchased the area of present-day Paris from its owners, platted 250 acres (100 ha) for a town, and offered land for public buildings in exchange for the Virginia legislature making the settlement the seat of the newly formed Bourbon County. In 1789, the town was formally established as Hopewell after Hopewell, New Jersey, his hometown. The next year it was renamed Paris after the French capital to match its county and honor the French assistance during the American Revolution.

Among the early settlers in the late 18th and early 19th centuries were French refugees who had fled the excesses of their own revolution. One Frenchman was noted in a 19th-century state history as having come from Calcutta, via Bengal, and settled here as a schoolteacher.

The post office was briefly known as Bourbontown or Bourbonton in the early 19th century, but there is no evidence that this name was ever formally applied to the town itself. It was incorporated as Paris in 1839 and again in 1890.

Paris is the "sister city" of Lamotte-Beuvron in France.

The Main Street stretch of Paris is a product of much time, effort, and money put into the preservation and revitalization of historic buildings downtown. With a handful of new restaurants garnering attention from the Central Kentucky region and beyond, a variety of downtown Paris businesses are reaping the benefits.

The Main Street Program in Paris has been active since 1992. From 2006 to 2008, fifteen buildings were renovated at a favorable time for financing such projects. More renovations were underway. Many projects used grants to renovate façades, under a program administered through GOLD, a state-funded program that works with Renaissance on Main to reward communities that "take steps to revitalize and maintain vibrant, economically sound development in Kentucky's downtown areas."

Downtown Paris ARTWALK, sponsored by the Paris Main Street Program, and founded by Miranda Reynolds and Steve Walton, has become a major social and artistic event in downtown Paris.

The Nannine Clay Wallis Arboretum, located at 616 Pleasant Street, is a 4-acre (16,000 m2) arboretum that is home to the Garden Club of Kentucky. Many of the trees on the grounds were planted in the 1850s when the house was built. Nannine Clay Wallis continued the tradition of planting the latest tree introductions when her father bought the property in 1900. New trees are always being added to the collection. Her daylilies and those hybridized by a former GCKY president, roses and other flowers are also featured. Admission is free.

The Hopewell Museum, located at 800 Pleasant Street, is free and open to the public on Wednesday through Saturday afternoons. The museum is closed the month of January. The Beaux Arts structure was built in 1909 and served as the area's first post office.

Six miles east of Paris is the Cane Ridge Meeting House. Built in 1791, it is said to be the largest one-room log structure in the country. The log building is now housed inside a large stone structure, which protects it from the elements. The Cane Ridge Meeting House is one of the sites of the Great Revival of 1801, where an estimated 25,000 worshipers gathered. From that revival, the Christian Church, Churches of Christ, and the Disciples of Christ (DOC) were founded, seeking to restore Christianity to its non-denominational beginnings.

There were 3,857 households out of which 31.9% had children under the age of 18 living with them, 43.8% were married couples living together, 16.5% had a female householder with no husband present, and 35.5% were non-families. 31.2% of all households were made up of individuals and 14.2% had someone living alone who was 65 years of age or older. The average household size was 2.33 and the average family size was 2.90.

All content from Kiddle encyclopedia articles (including the article images and facts) can be freely used under Attribution-ShareAlike license, unless stated otherwise. Cite this article:
Paris, Kentucky Facts for Kids. Kiddle Encyclopedia.