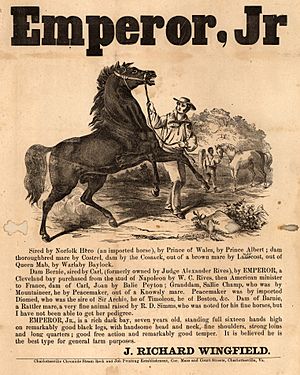 A stud in animal breeding is a male animal, such as a horse or dog, that is employed for breeding. The terms for the male of a given animal species (stallion, bull, rooster, etc.) usually mean that the animal is entire, that is, not castrated, and therefore capable of standing at stud. A specialized vocabulary exists for de-sexed animals.

A stud farm, in animal husbandry, is an establishment for selective breeding using stud animals.

All content from Kiddle encyclopedia articles (including the article images and facts) can be freely used under Attribution-ShareAlike license, unless stated otherwise. Cite this article:
Stud (animal) Facts for Kids. Kiddle Encyclopedia.