The Melbourne Cup is Australia's major horse race. It happens once a year. People say it is The race that stops a nation, it is for horses three-years-old and over, and it is 3200 metres long. The event has been held on the first Tuesday in November since 1861 (except on one year during the Second World War) by the Victoria Racing Club, on the Flemington Racecourse in Melbourne. Many people say it is the most important "two-mile" horse race in the world.

The event is one of the most popular events to watch in Australia. Over 110,000 people attend the race. Some people dress in traditional formal raceday clothing. Other people dress in different kinds of strange and amusing costumes, In 2005 a total of 383,784 race fans went to the Melbourne Cup Carnival annual event

Seventeen horses raced in the first Melbourne Cup in 1861. The prize was a gold watch and 170 pounds cash. Some people say Archer (the winner) walked 800 km to the course from Nowra, New South Wales. However, it is possible he travelled by ship. Four thousand people watched the race.

Archer won again the next year. However, because the owner's application form arrived late the next year, Archer was unable to try for a third cup. Many owners boycotted (did not race in protest) the race, so it started with only seven horses. That is the smallest number in the history of the cup. 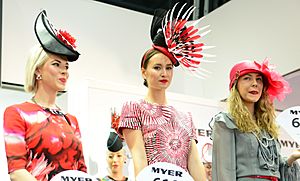 Finalists in Fashions On The Field at the 2013 race.

'Fashions On The Field' is a major focus of the day. Raceday fashion sometimes draws almost as much attention as the race itself. The miniskirt received worldwide attention when model Jean Shrimpton wore one on Derby Day during Melbourne Cup week in 1965.

In Melbourne, the race day is a public holiday. In the rest of Australia most people watch the race on television and gamble. Some people bet at the TAB (the Australian betting office). Other people bet in workplace cup "sweeps". (In "sweeps" each person pays a small amount [e.g. $3] and draws a random horse. First, second, and third place then share the money.) In 2000 it was estimated that 80 percent of the adult Australian population placed a bet on the race that year.

All content from Kiddle encyclopedia articles (including the article images and facts) can be freely used under Attribution-ShareAlike license, unless stated otherwise. Cite this article:
Melbourne Cup Facts for Kids. Kiddle Encyclopedia.