The Godolphin Arabian (c. 1724–1753), also known as the Godolphin Barb, was an Arabian horse who was one of three stallions that founded the modern Thoroughbred (the others were the Darley Arabian and the Byerley Turk). He was named after his best-known owner, Francis Godolphin, 2nd Earl of Godolphin. 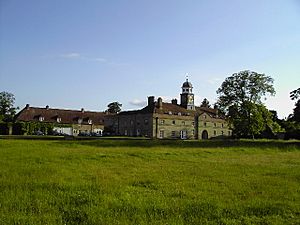 The stable block of Wandlebury House where the horse was buried

The Godolphin Arabian was foaled about 1724 in Yemen and moved several times before reaching England. At some early age, he was exported, probably via Syria, to the stud of the bey of Tunis. From there he was given to Louis XV of France in 1730. It is believed he was a present from monarch to monarch. Not valued by his new French owner, it is believed he was used as a carthorse.

The horse was then imported from France by Edward Coke and sent to his stud at Longford Hall, Derbyshire, where he remained until the death of his owner in 1733.

He was bequeathed to Roger Williams, "proprietor of the St. James's Coffee House", who inherited Coke's stallions. He was bought by the 2nd Earl of Godolphin, and placed at his stud at Babraham, Cambridgeshire, until his death on Christmas Day 1753. A stone marks his grave under the archway of the stable block of Wandlebury House.

The Godolphin Arabian was a bay colour with some white on the off heel behind. He stood at 15 hands (60 inches, 152 cm) and was distinguished by an unnaturally high crest, which is noticeable from portraits of the horse. Most of his immediate offspring were also bay.

The veterinary surgeon Osmer described the Godolphin Arabian in the following manner:

There never was a horse… so well entitled to get racers as the Godolphin Arabian…his shoulders were deeper, and lay farther into his back, than those of any horse yet seen. Behind the shoulders, there was but a very small space where the muscles of his loins rose exceedingly high, broad, and expanded, which were inserted into his quarters with greater strength and power than in any horse . . . yet seen. 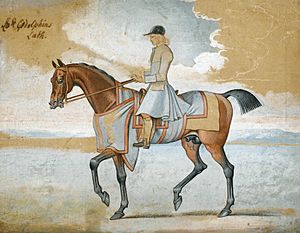 Originally, this small stallion was considered inferior to the larger European horses of the time and was not meant to be put to stud. Instead he was used as 'teaser', a stallion used to gauge the mare's receptiveness. This changed when Lady Roxana, a mare brought to the stud specifically to be bred to a stallion called Hobgoblin, rejected her intended mate, and so the Godolphin Arabian was allowed to cover her instead.

The result of this mating was Lath, the first of his offspring, who went on to win the Queen's Plate nine times out of nine at the Newmarket races. The second colt from this pair was Cade, and the third was Regulus. All three were the same gold-touched bay as their sire, with the same small build and high-crested conformation. All were exceptionally fast on the track, and went on to sire many foals themselves. This was the start of the Godolphin Arabian's prowess as a racing stud, and he spent the rest of his days as the Earl of Godolphin's prize stallion, bred to England's finest mares.

The American connection began with the filly Selima (born in 1745 out of Shireborn). She was purchased by Benjamin Tasker Jr. of the Province of Maryland in Colonial America, carried to the new world, and raced between 1750 and 1753. She won the biggest prize of the era, 2,500 pistoles at Gloucester, Virginia which marked "the beginning of the remarkable racing contests between the rival colonies of Maryland and Virginia." After this, she became a successful broodmare at the Belair Stud in Collington, Maryland.

The Godolphin Arabian died on the Gog Magog Hills, Cambridgeshire in 1753, aged around 29. The horse's grave in the stable block of Wandlebury House can be visited. When he was interred, the occasion was marked with ale and cake.

Although today the majority of Thoroughbred horses’ sire lines trace to the Darley Arabian, several famous North American horses of the past trace their sire line back to the Godolphin Arabian. These include Seabiscuit, Man o' War, and War Admiral. Today, the sire line is primarily supported by descendants of Relaunch and his son Cee's Tizzy through dual Breeders' Cup Classic winner Tiznow.

In Europe, his influence survives mainly through the 2,000 Guineas winner Known Fact, and his son, the champion miler Warning. This line has produced outstanding sprinters such as Diktat (Haydock Sprint Cup), Avonbridge and Dream Ahead. The Derby has not been won by a sire line descendant of the Godolphin Arabian since Santa Claus in 1964 and is nowadays dominated by descendants of the Darley Arabian.

The major Thoroughbred sire Eclipse traces in his sire line to the Darley Arabian, but his dam was a daughter of Regulus and thus also traces to the Godolphin Arabian. This pattern continues to be seen today, with the Godolphin Arabian more heavily represented in dam lines and in the "middle" of pedigrees (as opposed to direct sire lines).

King of the Wind (Chicago: Rand McNally, 1948) is a fictional biography of the Godolphin Arabian by American author Marguerite Henry. She wrote many books about horses for children, and perhaps is best known for Misty of Chincoteague and its sequels. She won the Newbery Medal for King of the Wind, recognizing it as the year's "most distinguished contribution to American literature for children". Misty became a film in 1961, but King of the Wind had to wait till 1990 for its adaptation, with Navin Chowdhry as the Arabian's lifetime stable boy Agba.

In the novel, the Godolphin Arabian was foaled in Morocco and was called Sham. He came to Europe as a diplomatic gift to King Louis XV of France but, due to his poor condition on arrival and relatively small size, was given to the cook as a cart horse. He was soon sold to a woodcarter in Paris, where he was treated poorly and then purchased by the Quaker Edward Coke of Holkham Hall, older brother of the 1st Earl of Leicester 5th Creation, then sold to Francis, Earl of Godolphin, who maintained a stud in Suffolk, near the racing town of Newmarket.

All content from Kiddle encyclopedia articles (including the article images and facts) can be freely used under Attribution-ShareAlike license, unless stated otherwise. Cite this article:
Godolphin Arabian Facts for Kids. Kiddle Encyclopedia.