Misty of Chincoteague facts for kids

Misty of Chincoteague is a children's novel written by Marguerite Henry, illustrated by Wesley Dennis, and published by Rand McNally in 1947. Set in the island town of Chincoteague, Virginia, the book was inspired by the real-life story of the Beebe family and their efforts to raise a filly born to a wild horse. It was one of the runners-up for the annual Newbery Medal, now called Newbery Honor Books. The 1961 film Misty was based on the book.

Misty of Chincoteague begins with an account of the wreck of a Spanish galleon off the coast of Virginia. The ponies in the hold of the galleon swim to Assateague Island and become feral as the years and eventually the centuries pass.

Paul and Maureen eventually break the Phantom to ride, and the next year Paul races her on Pony Penning Day. Phantom wins, but the next day becomes distressed when she sees the herd she once belonged to, led by a stallion called Pied Piper, being released to swim back to Assateague. Paul releases Phantom, and she gallops to join Pied Piper and the herd as they return to freedom on their ancestral island. Misty remains behind with Paul and Maureen.

Misty was inspired by a real-life Chincoteague Pony of the same name. The actual Misty was foaled in domesticity in 1946, on Chincoteague, at the Beebe Ranch, not in the wild on Assateague Island as told in Henry's novel. As in the book, however, she was in fact sired by a chestnut pinto stallion named Pied Piper, from a smokey-black pinto dam called Phantom. Although these horses also were domesticated in real life, they too provided inspiration to Henry for the wild ponies portrayed in the novel.

Misty was a palomino pinto, whose coloration and markings included a large patch of white on her side shaped much like the United States. Her hoof prints are impressed in the cement of the sidewalk outside the Roxy Movie Theatre in Chincoteague.

After being purchased by Marguerite Henry as a weanling in November 1946, and spending her early life at Henry's Wayne, Illinois home, she was moved back to the Beebe Ranch in Chincoteague in 1957. A goodbye party with over 300 children and 160 adults in attendance was held by Henry in Wayne for Misty when she left for Chincoteague.

Back in Chincoteague, Misty had three foals: Phantom Wings in 1960, Wisp O' Mist in 1961, and Stormy, a chestnut pinto filly with a blaze in the shape of a crescent moon on her forehead, in 1962. As of 2015, there were almost 200 known descendants of Misty.

The Misty of Chincoteague Foundation was formed by Marguerite Henry and Rebecca Guisti in 1990, with the two-fold mission of preserving Misty's legacy, and promoting reading by children. Funds were raised to commission a statue of Misty, sculpted by Brian Maughan, to be erected on Chincoteague, which was formally unveiled on July 29, 1997. An identical casting of the Maughan statue was also placed at Kentucky Horse Park in Lexington, Kentucky. 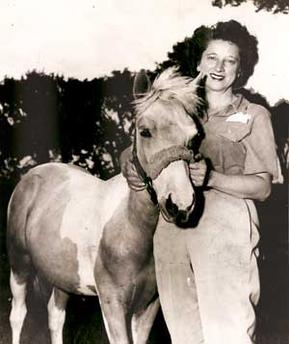 In the second novel, Sea Star, published only two years after the original, Misty is "sold to be shared with children the country over" and the Beebe children rescue a "tiny orphaned colt" after the Pony Penning.

The third novel, Stormy, Misty's Foal, was published in 1963. It tells of the Ash Wednesday Storm of 1962 on Chincoteague, and the birth of Misty's last foal, Stormy. Misty and Stormy had made appearances at theaters and schools in the area to help raise funds for replenishment of the herds on Assateague in the aftermath of the 1962 storm.

The fourth novel, Misty's Twilight, was published after Henry's 90th birthday, and almost 30 years after the third. Kirkus Reviews observed that it was "billed as fiction but more like a fictionalization concerning one of Misty's descendants". It concluded its contemporary review, "this adult-centered narrative about an affluent doctor—whose troubles with her horse are always addressed by hiring yet another trainer—may be authentic, it will be of interest mostly to those who relish every crumb about Misty's family."

For the 50th anniversary in 1997 of the original novel, only the month before Henry's death, Simon & Schuster released a diary garnished with quotations from Misty of Chincoteague and new illustrations by Bill Farnsworth (Little Simon, October 1997); .

Misty's legacy in other literature

Several of the real-life Misty's descendants have been featured in books by other authors, in addition to Henry:

A series of children's books by Misty family pony-breeder Kendy Allen debuted in 2006. The series includes:

All content from Kiddle encyclopedia articles (including the article images and facts) can be freely used under Attribution-ShareAlike license, unless stated otherwise. Cite this article:
Misty of Chincoteague Facts for Kids. Kiddle Encyclopedia.